Aerospace engineering firm Rolls-Royce has come under heavy pressure to conclude a fresh capital raise with investor concerns the board has been slow to act building. The worry is that the delay has now left the company, whose share price dropped to a 17-year low yesterday after plunging another 7% to 130p.

The Rolls-Royce share price has been in steep decline for days now and the company’s value has shed £1.4 billion in just 2 weeks. That takes the total hit to the engineer’s value to £10 billion since the start of the pandemic. One of Rolls-Royce’s main sources of revenues is building and servicing commercial jet engines, demand for which has dropped of drastically with international travel interrupted.

There is speculation that Rolls-Royce may announce a rights issue as early as today but an anonymous senior figure at a ‘top 20’ major institutional shareholder is reported as telling The Times newspaper:

“They’ve not been decisive enough. Other companies have moved more quickly [in raising capital]. They’ve given the bears a free hit.” 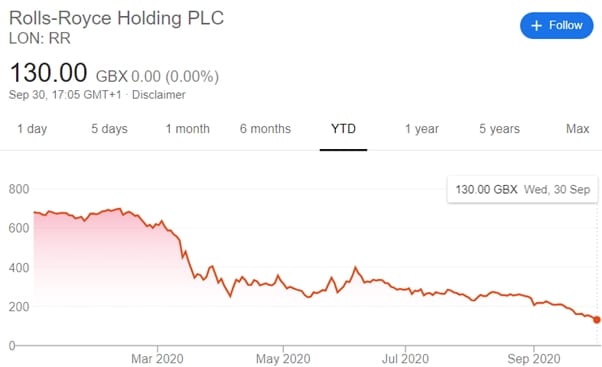 Major investors worry that the company’s negotiating position has weakened considerably over the past couple of weeks and the result of that will be poorer terms with prospective new investors. That could result in the stakes held by existing investors being diluted by more than would have been the case if a rights issue had been launched earlier.

Over the past fortnight, the company has three times issued statements that were “responses to media speculation”. One of these responses revealed that the Rolls was ‘considering’ an equity raise worth up to £2.5 billion. But that not being followed up by a firm announcement leaves the company, believe investors, vulnerable to short sellers.

Two well-known short sellers, Sandbar Asset Management and Alliance Bernstein, have already established and registered short positions with the FCA, amounting to a total of 1.71% of the company’s shares.

Despite the heavy impact of the drop-off in its aviation engines businesses, Rolls-Royce builds engines for both Airbus and Boeing, the company’s relatively comfortable reserves of £8 billion in cash and other liquid assets appears to have put its board off hurrying into an equity raise.

Major cost cutting plans including job losses and possible assets sales have already been announced. But with the impact of the Covid-19 pandemic stretching well into 2021 now looking unavoidable, the need for an equity raise is now being recognised.

One investment banker is last night reported to have commented that if companies might need cash, their best strategy is to “go hard, go early”. Delaying as Rolls-Royce has done, waiting to see if a raise could be avoided, means that now it will have to go ahead its terms will be less favourable.

During the spring and summer months, numerous public companies were able to raise capital without seemingly breaking sweat, with investors hungry for new equity. New lockdown measures and a second wave of coronavirus has dented that optimism and investors are now approaching the market with greater caution. That’s not in Rolls-Royce’s favour.