British-Dutch oil major Shell has announced the cull of 9000 jobs in a bid to prop up a share price that has dropped to multi-decade lows this year due to rock bottom oil prices. The jobs, over 10% of the company’s total work force, will be shed over the next two years. In the near term the restructuring will help dramatically reduce costs that cannot be supported by current oil prices. The changes will also help with the company’s need to shift towards providing far more renewable energy over coming years.

Of the 9000 total, the cull includes 1500 staff who have already agreed to take voluntary redundancy. The remaining 7000-9000 jobs will be discontinued by the end of 2022 and the company hopes voluntary redundancy will account for as many as possible. Royal Dutch Shell expects the jobs cuts to save it between $2 billion and $2.5 billion a year. 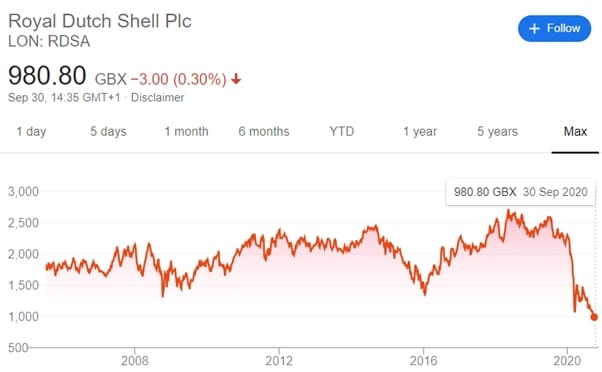 Shell employs around 6500 people in the UK and hundreds of the 9000 positions to go may well come here. Roles connected to North Sea operations, many of which are not commercially viable at current oil prices, look vulnerable and Shell also employs thousands of people in its UK corporate offices and across its retail energy supply business.

Shell chief executive Ben van Beurden commented that making decisions on which jobs will have to go was “an extremely tough process” and “very painful to know that you will end up saying goodbye to quite a few good people”. He did, however, go on to say “reducing cost is essential” and that the move was “the right thing to do for the future of the company”.

Shell had previously outlined the need and plan to reduce the company’s operating costs by between $3 billion and $4 billion by early 2021, to stem losses resulting from rock bottom oil prices. There will, said the company today be “some overlap” between the job cuts announced today and previously stated targets. It sounded a little vague and a cynic might suggest the extent of the ‘overlap’ may well be defined by how successfully other operating cost cuts prove.

Oil prices have plunged this year after pre-existing market oversupply was compounded by a sharp drop off in demand as a result of the Covid-19 pandemic and resulting lockdowns. Shell has already been forced into cutting its dividend for the first time in its post-Second World War history after falling to a record $18 billion loss in the second quarter.

On one reading of the position Shell finds itself in, the drop in oil prices helps accelerate restructuring that would anyway have had to be made as the company transitions towards a goal of achieving “net zero” emissions by 2050. Changes that may otherwise have met more resistance are now largely accepted as necessary.

“We have to be a simpler, more streamlined, more competitive organisation that is more nimble and able to respond to customers….In many places, we have too many layers in the company: too many levels between me, as the CEO, and the operators and technicians at our locations”.

Shell will still be a predominantly oil and gas company for the foreseeable future, as it needs to generate strong cash flows from its traditional business to achieve “the financial strength to invest further in our lower-carbon products”. There will even still be some oil and gas in the ‘energy mix’ the company sells in 2050, even if it succeeds in balancing those emissions out to achieve a “net zero” carbon footprint as a company.

Shell also provided an update on third-quarter trading, informing investors that its liquefied natural gas business would see drops in revenues with sales linked to oil prices with a lag of around six months. That means the bottom of the oil price crash in March and April will be reflected in liquified natural gas prices this quarter.