The Royal Mail share price has bounced back from losses of over 12% yesterday with gains of almost 5% today heading into late morning. Yesterday’s share price drop was provoked by a warning from the formerly state-owned mail delivery group that it expects further declines in its performance over the months ahead as the cost-of-living crisis hits e-commerce and parcel delivery. It had already published full-year profits that fell short of its forward guidance.

The company’s valuation has fallen by nearly 42% in the past twelve months and 40% this year after a short-lived recovery late last year thanks to forecast-beating profits on the back of a strong e-commerce market. Another recent blow to performance has been the end of mass testing for Covid-19. Delivering Covid-19 testing kits made up as much as 7% of Royal Mail’s turnover last year. 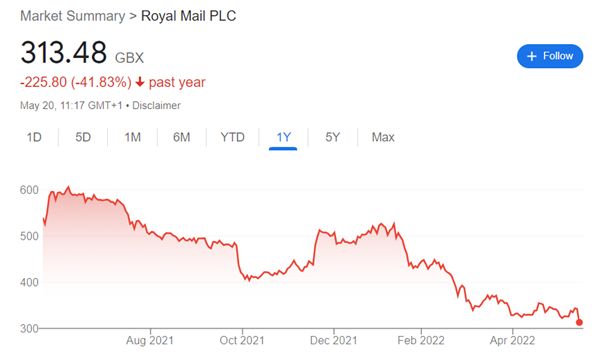 Royal Mail is also facing up to the threat of a nationwide postal strike over pay. The company has so far offered its 115,000 front-line employees a 2% pay increase, rising to 5% if changes to work practices proposed are agreed to. With inflation currently running at 9%, unions are pushing for an improved offer.

Royal Mail’s 2013 IPO, which attracted large numbers of retail investors, sold shares in the postal and courier services company at 330p. Almost a decade later they are worth a little over 313p. Last summer they rose above 600p after the company reported record profits during the pandemic.

Royal Mail’s parcels business declined by 7% last year compared to 2020 and letter deliveries have been declining for years as digital communication replaces them. Last year revenue from letters was down 18% on 2019, the last pre-pandemic financial year. Comparable operating profits for the year to the end of March were £416 million for the UK business. While that represented 20% growth on the year before it fell shy of the £430 million it had told investors it expected when announcing its Q3 results.

The outlook for the current year is bleak with operating profits expected to drop by 30% on last year, in line with the analysts’ consensus for £303 million. However, the company flagged downside risk, admitting meeting even that reduced figure meant “assuming a pay deal can be agreed broadly in line with the current offer and without material industrial disruption”.

£350 million of new cost savings are being targeted after the recent streamlining of middle management roles eliminated 2700. The number of workers in sorting hubs has also been reduced through greater automation. Price rises averaging out at 4% across the group have also been introduced including a 10p increase in the cost of a first-class stamp to 95p, a 12% rise.

Despite that price hike, Royal Mail continues to underperform a regulatory target of 93.7% of mail delivered with a first-class stamp by the next day. Last year 86% of first class mail was delivered the next day. Chief executive Simon Thompson put that underperformance down to high levels of staff absences caused by Covid-19.

Across the whole group, including its businesses in Europe and North America, Royal Mail’s revenues were up 0.6% to £12.7 billion last year. The North American business GLS contributed 33% of group revenues and 45% of profits. Comparable group operating profits gained 8% to rise to £758 million.