The UK’s oldest insurer is on the verge of being broken up after RSA’s board recommended investors accept a £7.2 billion takeover offer. A joint deal is on the table which, if voted through by investors as expected, will see Canadian group Intact Financial Corporation acquire most of RSA, including its businesses in the UK and Canada. And Denmark’s Tryg pick up its Swedish and Norwegian businesses. Tryg and Intact will share RSA’s Danish operations.

The RSA share price is up a little over 4% today, taking its valuation to a fraction under £7 billion, suggesting markets believe the deal is all but done. The offer being recommended values RSA at 685p-a-share, which represents a 51% premium on the RSA share price on November 4th, the days before news of the offer broke. An additional 8p-a-share interim dividend announced by RSA in September will also still be due to shareholders.

RSA’s history stretches back to 1710, when the Sun Fire Office, London’s oldest documented insurer, was founded. Over the 310 years since, the company has grown into one of the UK’s largest insurance groups. It offers all of the most common retail insurance products, from car and home cover to life insurance and commercial insurance products for businesses.

Like most insurers, RSA is braced to take the impact of heavy pay-outs resulting from the Covid-19 pandemic. 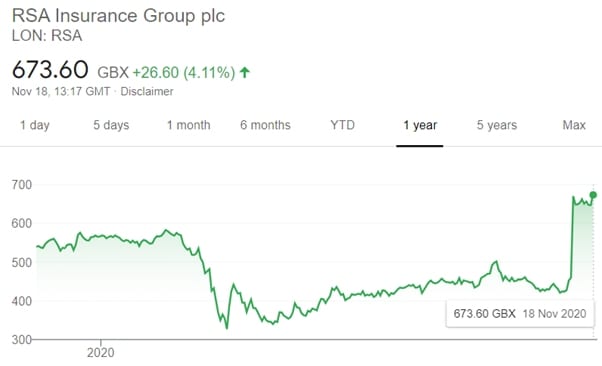 Stephen Hester has been RSA’s chief executive for six years now. Following a rocky start that included a string of profit warning over his first years in charge, as well as an accounting scandal at the Irish business, Mr Hester has since turned the company around. That success in revitalising the insurer has ultimately culminated in an offer the board feels represents value to shareholders.

The bid has also been endorsed by Cevian Capital, RSA’s largest shareholder with a 14% stake in the business. The activist investor says it has given an “irrevocable undertaking” to vote in favour of the offer.

Intact and Tryg also announced this morning their bid has the support of pension trustees, whose agreement was key to a deal being achievable. Intact will take on the management of and responsibility for RSA’s three UK defined benefit retirement schemes. Current funding arrangements worth around £75 million a year will be honoured.

“The board of RSA is pleased to be recommending Intact and Tryg’s cash offer for the company, which delivers attractive, certain value for our shareholders.

“The offer reflects the strength and performance of RSA during a challenging period for our industry, representing a significant premium in cash.”