The Ryanair share price gained over 3% yesterday to hit an 18-month high, after the Irish budget airline announced an increase in its order of Boeing 737 Max jets. Another 1.3% has been added during early trading this morning, taking the company’s valuation above £16 billion.

Ryanair has weathered the Covid-19 storm of 2020 far better than budget rival Easyjet and is now worth more than it was at the start of the year, despite passenger numbers being decimated and losses recorded. However, investors clearly view the company as being in a strong position to capitalise on the deeper woes of rival airlines, such as imperilled national carriers budget peers left in a weaker financial position.

Easyjet’s share price is still over 40% off its February high, before the pandemic inspired sell-off hit stock markets. 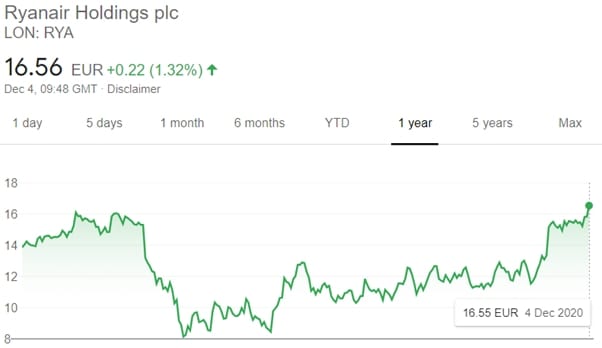 Ryanair’s increased commitment to the 737 Max is a boost for Boeing, with the aircraft grounded since the spring of 2019 after two crashes that killed 346 people happened within 5 months. It was taken out of service while potential technical flaws were investigated.

Last month U.S. regulators approved the Boeing 737 Max for a return to the skies and Ryanair has put its trust in the diligence of their safety assessment process. Boeing’s share yesterday soared by 6% on news of the increased order, to reach a post-pandemic high of $237.20. Other international regulators are also expected to pass the model for a return to service over the next several weeks.

Ryanair is believed to have struck a hard bargain, having negotiated compensation for the delay to its original order and a ‘modest’ discount on the 75 new aircraft added to the contract. The total value of the deal is around $22 billion, working out at a little over $100 million per jet. However, market analysts believe that once all compensation and other discounts have been factored in, Ryanair is unlikely to be paying even $50 million per jet, a huge discount on their list price.

Michael O’Leary, Ryanair’s outspoken chief executive, yesterday complained the discount on the extra jets “should have been bigger”, in a buyer’s market. But few investors will take that as an admission Boeing got the better of the deal. They will be confident the American aerospace company’s margins on the aircraft are likely to be far lower than they would have liked and O’Leary has leveraged his company’s strong position.

Ryanair already negotiated ‘launch customer pricing’, when agreeing to be among the first major buyers of the new Max model back in 2014. Boeing will now accelerate deliveries, with Ryanair taking ownership of all 210 new aircraft by the end of 2024.

The first of the new aircraft to be delivered will be based at Ryanair’s Stansted hub, its largest. They will operate the airline’s most popular routes to Spain and Portugal. Mr O’Leary is also confident the model’s history will not be a factor for Ryanair’s passengers. When asked if he was worried some passengers might refuse to fly on a 737 Max, his response was curt:

In his typical straight-talking manner he added that any passengers who did not wish to board a Max were welcome to wait for the next non-Max flight to their destination. And it is unlikely the new jets will bear the ‘Max’ name, which looks like it is being quietly dropped in favour of ‘Boeing 737 8200’. Mr O’Leary is unconcerned with the name change, remarking:

“I don’t care what they call it as long as people are buying our low fares.”

He is confident the additional 8 seats per plane the 737 offers, which will reduce fuel costs per seat by 16%, will prove a “gamechanger”, allowing Ryanair to reduce ticket prices even more.

Mr O’Leary believes Ryanair will bounce back strongly next year, forecasting passenger number of between 95 million and 130 million over the financial year between March 2021 and March 2022, thanks to pent up demand. By 2025-26, he expects Ryanair to be carrying 200 million passengers. Pre-Covid, that total was expected to be reached 2 years earlier.