The Ryanair share price has dipped 2% today on the announcement the Irish budget airline is to delist from the London Stock Exchange (LSE). The company blamed Brexit for the decision to fly out of London after 23 years saying that London trading in its stock has fallen markedly since the UK left the European Union. Ryanair’s primary listing is on the Dublin stock exchange.

Ryanair has submitted its notice to the Financial Conduct Authority (FCA) and expects its London-listed shares to be cancelled on December 17th. It’s the first time since Brexit that a European Union-headquartered company has abandoned a listing on the LSE and directly blamed Brexit for the decision. 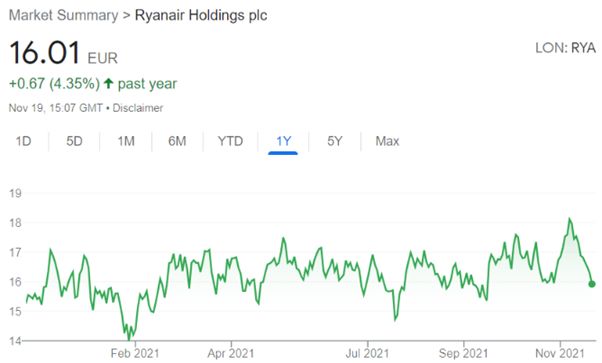 The company, whose chief executive is the outspoken Michael O’Leary who has been in charge for 27 years now, said post-Brexit “complications” meant its London listing was no longer seen as tenable. The possibility was brought up earlier this month when Ryanair presented investors with its half-year results but the speed at which it has been acted upon comes as something of a surprise.

A statement released by the airline read:

“As indicated at our interim results, and following subsequent shareholder engagement, Ryanair has decided to request the cancellation of [its] London Listing as the volume of trading of the shares on the London Stock Exchange does not justify the costs,” the carrier said this morning. It believes that the move will “consolidate trading liquidity to one regulated market for the benefit of all shareholders”.

The ”complications” referred to as behind the decision to give up its London listed are the result of EU rules that require that European airlines are majority owned and controlled by investors who are EU citizens. That no longer applies to UK citizens which have had to be blocked from purchasing more or additional shares in the airline to mitigate the risk of it transgressing the majority EU ownership rule.

In September there was even an announcement that around a million shares held by UK citizens would have to be given up by a forced sale to meet Brussels rules. However, that wasn’t enough to bring Ryanair back into majority EU ownership. O’Leary told investors earlier this month the European Commission “wants us to be seen to be taking action”.

Ryanair’s circumstances, thankfully for the City, so far appear to be relatively unique and a direct result of the particular EC rules around European airlines. Otherwise the feared exodus of European companies from the London Stock Exchange has not materialised. In fact, earlier this week the much larger Royal Dutch Shell announced it is to drop the “Royal Dutch” from its name, abolish its dual class share structure and move its headquarters to the UK from the Netherlands. Unilever, another Anglo-Dutch giant, ent through a similar process last year.