Budget airline Ryanair has reported a record €197 loss over the first half of it fiscal year after a summer of low levels of air travel compounded the effect of grounding fleets over the spring lockdown. Losses over the second half of the year, which runs from October to the end of March, are expected to come in even higher. 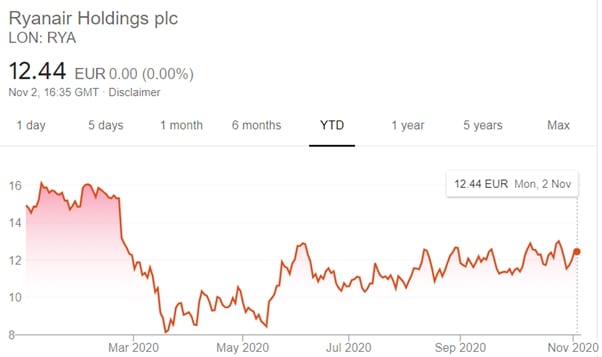 However, a late afternoon fightback saw the Ryanair share price finish the day strongly, taking it to a gain of 3.8%. Investors were reassured that the company’s balance sheet, one of the strongest in the industry, will allow it to see the crisis through.

CEO Michael O’Leary also outlined a new hard-line stance on refunds over the new lockdown introduced in the UK this month. He said that as long as flights were still operating over the new lockdown, refunds would not be provided, regardless of new government guidelines advising against non-essential travel.

Criticising the government’s approach, he invited the Treasury to “feel free”, to refund tickets already booked. Ryanair will only offer re-booking of flights on later dates free of charge.

But the pugnacious boss insisted all customers who had applied for refunds up until the end of August had been either reimbursed or received vouchers to the value of their flights. In response to alleged complaints to the contrary made to the BBC being read out by Rachel Burden, host of BBC Radio 5’s Breakfast, O’Leary said:

“We have no customers outstanding who have requested a refund who haven’t received it. So don’t mind . . . these hearsay claims.”

He labelled the complaints made “completely false”, going on to say:

“You’re going to keep reading these untrue emails, which only you have access to. The emails you are reading are factually incorrect.”

Over the first six months of its financial year, April-September, Ryanair flights carried just 18 million passengers, compared to 86 million over the same period of 2019. That saw a 78% drop in revenue to €1.18 billion. In 2019, Ryanair recorded a profit of €1.15 billion for the period. The tight margins that budget airlines operate with means that most of Ryanair’s annual profit is banked over the summer months.

Over the entire current financial year, Ryanair expects to carry a total of 38 million passengers compared to 149 million last year. That target has been maintained despite the new lockdown rules. But O’Leary did add the caveat that those numbers could fall further “if EU governments continue to mismanage air travel and impose more uncoordinated travel restrictions.”

Air traffic across Europe could, said O’Leary, drop by as much as 75% from its usual levels this winter. Ryanair currently plans to operate around 40% of its usual European schedule over the winter months. By next summer, depending on how the pandemic develops, the airline hopes to operate at between 50% and 80% of its usual capacity.

Ryanair investors at least have the comfort of knowing the company has one of the strongest balance sheets in the airline industry, with cash reserves of €4.5 billion as of the end of September. Its fleet of aircraft is worth a further €7 billion. As well as Ryanair, the company operates the Malta Air, Buzz and Lauda airlines and airline transport company Ryanair DAC.

The company currently employs around 19,000 staff. Most have kept their jobs after pilots and crew accepted pay cuts and unpaid leave over the summer, despite Ryanair announcing at the start of the pandemic that around 3000 redundancies would have to be made to cut costs. The total number of job losses should be less than that figure but the process of cutting roles will now start again after the introduction of the latest lockdown restrictions.