Saga, the over-50s insurance and cruises group was one of the biggest and most publicised IPOs on the London Stock Exchange in recent years when it went public in 2014 at a valuation of over £2 billion. A large part of the reason the IPO attracted such media attention was that most of the 185p shares sold were allocated not to institutional investors as is the norm but to 200,000 retail investors. Most of them were Saga clients themselves and convinced by a familiar name and their trust in a company they had personal dealings with. 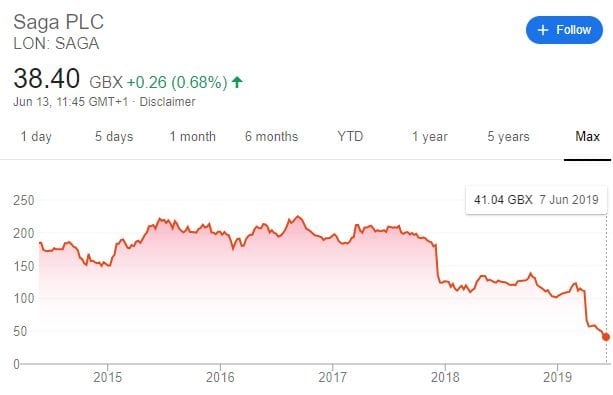 Post-IPO things started well for investors as the Saga share price climbed to a high of over 225p in 2016. However, things have gone badly wrong since and those who bought shares during the IPO and have held on to them until now are down around 75%. Yesterday the share price crashed by 4.7% to a little over 38p. A heavy blow to investors, most of whom are, on the presumption they were as Saga clients already over 50 in 2014, now approaching or already in retirement.

The group’s chairman Patrick O’Sullivan used yesterday’s announcement of the departure by mutual consent of CEO Lance Batchelor to point the finger at Saga’s former private equity owners for the woes of IPO investors.

Specifically mentioning Charterhouse, CVC and Permira plus their bank advisers led by Citigroup, O’Sullivan accused the companies of ‘over-egging’ the company’s potential to drive up their own returns. As well as the shares they sold off during the IPO, the three private equity companies divested themselves of their remaining stakes through large block sales at 195p and share and 200p a share in 2015 and 2016. The share price has subsequently tanked.
O’Sullivan yesterday suggested that the former owners had exaggerated the company’s potential to private investors by encouraging the view it was set to expand into a range of other services targeting the over-50s demographic.

Those included domiciliary care and wealth management. However, O’Sullivan now says those expansion claims were based on “no evidence” that Saga could successfully expand its range of products and service offering.

The former owners and their banking advisors’ worst perceived crime was marketing the IPO to retail investors and its own clients at the 185p a share valuation because they had already been turned down by institutional investors who saw no value at that price.

The same three private equity firms were also behind the AA IPO, which floated the roadside assistance group just a few months after Saga. Its share price has also tanked since, down 80% on the IPO valuation. CVC masterminded the flotation of Debenhams, the retailer that failed in April with shareholders losing the entirety of their investment. The same company is now trying to put together a rescue package that would see it retake ownership of Debenhams for a fraction of the price it sold out of it at.

While most still caveat the argument with the get-out clause it is far from... END_OF_DOCUMENT_TOKEN_TO_BE_REPLACED

Natural gas prices have rocketed with Russia accused of managing supply to drive up... END_OF_DOCUMENT_TOKEN_TO_BE_REPLACED

After their valuations boomed in 2020, the UK’s online fast-fashion giants of Asos and... END_OF_DOCUMENT_TOKEN_TO_BE_REPLACED

The dust has almost settled on the months-long takeover battle between U.S.-based private equity... END_OF_DOCUMENT_TOKEN_TO_BE_REPLACED