Sage of Omaha Warren Buffet Sells Out Of Airlines

The most dramatic announcement of a very unusual shareholders meeting for Berkshire Hathaway, the Warren Buffet investment vehicle that is one of the biggest companies in the world, was that it had completely sold out of all of its holdings in airlines during April. Berkshire sold over $6 billion of stock held in four major U.S. airlines – American Airlines, Delta Air Lines, Southwest and United Airlines.

Buffet, who many regard as the most successful investor in history, chose to lock in major losses on the airline stocks due to a perceived change in the underlying conditions in which companies in the sector will operate under in a post-coronavirus world.

He put a large part of the $50 billion loss Berkshire Hathaway booked for the quarter, and its drop in value due to a sliding share price, down to his decision to invest in airlines. But he told investors he believed that with that mistake having been made, it was better he cut the losses now rather than hope for the industry to recover. That is something he clearly feels is unlikely to happen, telling shareholders who dialled in via videoconferencing technology rather than making the traditional pilgrimage to the company’s headquarters in Omaha, Nebraska:

“I don’t know if two or three years from now if as many people will fly as many passenger miles as they did last year. If the business comes back 70 or 80 per cent, the aircraft doesn’t disappear. You’ve got too many planes.” 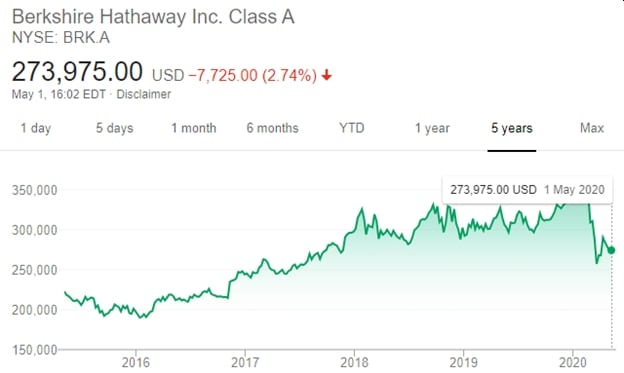 Buffet also told investors of the company’s current struggles to find companies to invest in, which may mean Berkshire does not take a similar approach during this economic downturn as it did in the wake of the 2008 crisis. He believes that the swift action taken by the Federal Reserve to prop the economy up means companies are not in the same need of cash as they were 12 years ago.

“We haven’t seen anything attractive. The Federal Reserve did the right thing and they did it very promptly and I salute them for it. But a lot of companies that needed money . . . got to finance in huge ways in the last five weeks.”

Mr Buffet expressed the opinion corporations and financiers owe the US central bank’s policymakers a debt of gratitude for the way the so quickly and decisively acted to unfreeze credit markets in March by agreeing to buy investment grade corporate bonds and ETFs invested in ‘junk credit’.

However, while the Berkshire Hathaway chief believes the Fed did a great job, he does think that it has meant a lack of opportunities for his company.

“We were starting to get calls,” he said, referring to companies in need of cash from investors. But the calls stopped when the central bank moved to pick up the bill and take on billions in credit. “A number of them were able to get money in the public market frankly at terms we wouldn’t have given to them.”

Globally, companies have borrowed more than $1.1 trillion from bond markets over March and April – new records were set in both months. S&P Global Market Intelligence’s LCD unit also published data showing companies had drawn down more than $250 billion from revolving credit facilities available to them.

External analysts, however, believe opportunities will come Berkshire Hathaway’s way in the months ahead and that Buffet is now being patient and disciplined by keeping his powder dry rather than lending at terms that are not especially favourable right now.

Buffet started the shareholders meeting with a history lesson that walked viewers through previous crises, from the Great Depression and Civil War to the Spanish flu pandemic. While he was cautious and impressed the seriousness of the Covid-19 pandemic he was also keen to emphasise he felt the USA’s economy will bounce back eventually. Two of his slides read

He added his own message to that with:

“We faced great problems in the past. We haven’t faced this exact problem . . . but we faced tougher problems and the American miracle, the American magic has always prevailed and it will do so again.”

The company he leads has been hurt by the pandemic, suffering a $49.7bn loss in the first quarter after its stock portfolio was hammered alongside a broad market sell-off. Berkshire’s sprawling group of subsidiaries was hampered by government lockdowns and a decline in consumption. Investment gains generated by Berkshire’s insurance arm helped lift overall operating earnings 6 per cent, the measure Mr Buffett points to as one of the best means to evaluate the group’s performance, but profits at subsidiaries involved in transport.