The chief executive of J Sainsbury (Sainsbury’s) yesterday attempted to dismiss speculation around imminent takeover bids by pointing to a steady improvement in the supermarket chain’s share price under the current management and ownership structure. Simon Roberts was responding to rumours newly ignited by the ongoing takeover battle for rival Morrisons that Sainsbury’s would be the next private equity target.

Mr Robert’s response to the speculation came as Sainsbury’s reported 1.6% growth in like-for-like sales over the 16 weeks that ended June 26th. The performance, which has also led to forward guidance on expected profits being revised up to £660 million from the £620 figure given in April, was ahead of analyst expectations. It would also represent significant growth on the figure of £586 million booked last year.

In response to questions on whether he thought Sainsbury’s was also vulnerable to takeover bids from private equity, Mr Roberts pointed to the company’s increasing valuation over the past year. He conceded the “sector has been undervalued for quite a period of time”, but added:

“You’ve seen the improvement in our share price over the recent period of time…. We are very focused on the plan we laid out in November to really deliver for our customers and shareholders”.

The Sainsbury’s share price is up over 20% since the beginning of the year has added another 0.75% during morning trading today. 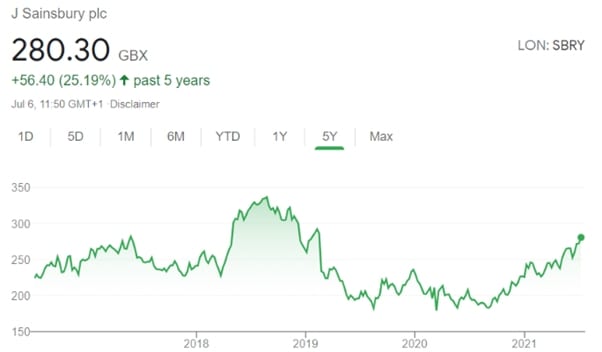 There has been speculation by industry analysts that the private equity giants and consortiums currently battling it out for Morrisons could move on to bid for Sainsbury’s if they lose out. Roberts insists that, at least for now, there has been no approach, telling investors:

Industry experts have suggested that one of the private equity firms presently circling Morrisons could turn their attention to Sainsbury’s if they missed out.

“If we had something to update on, we would but we have nothing to update … We are incredibly focused on delivering our plan and the potential that we see in the business.”

Despite the fact the same period last year covered the panic buying stage early in the pandemic, grocery sales were actually 0.8% higher over the same 16 weeks this year. Food sales remained stable at 11.3% higher than the same period two years earlier, before the coronavirus crisis.

Roberts did, however, report a drop in online sales as more shoppers have returned to the store as the vaccination programme has rolled out. However, increased capacity means they were still 29% up on the same period a year earlier and accounted for 18% of revenues compared to 8% a year ago.

£50 million is to be invested in reducing the prices of staple food products and a scheme that will see prices matched with those of German discounter Aldi.

The performance of Argos has, however, slipped by 3.7% compared to last year. That’s been put down to last year’s rush for office chairs and desks, garden furniture and other items related to people starting to work from home at the onset of the pandemic.

Robers also touched on supply chain issues being experienced due to lorry driver shortages and other strains. He highlighted shortages of pre-bagged salad being felt across the sector and said the company is working with the government to find answers, concluding:

“There are undoubtedly challenges there and we have to find solutions.”

2020 was a disaster for income investors as the onset of the coronavirus crisis... END_OF_DOCUMENT_TOKEN_TO_BE_REPLACED

With gains of 21% since the beginning of the year, commodities has been the... END_OF_DOCUMENT_TOKEN_TO_BE_REPLACED

The London-listed mining company Rio Tinto has just announced it will pay out record... END_OF_DOCUMENT_TOKEN_TO_BE_REPLACED

Since he founded it as an online bookseller from the garage of his rented... END_OF_DOCUMENT_TOKEN_TO_BE_REPLACED

Last month the board of Wm Morrison, the UK’s fourth largest supermarket chain by... END_OF_DOCUMENT_TOKEN_TO_BE_REPLACED