The J Sainsbury’s share price gained almost 7% yesterday after the supermarket chain, on of the UK’s ‘big four’, posted forecast-beating profits for the last quarter. The company’s third quarter sales were up 8.6% like-for-like on the same period in 2019. And revenues over the festive period, counted as the 9 weeks that ended January 2nd, were up 9.3%. 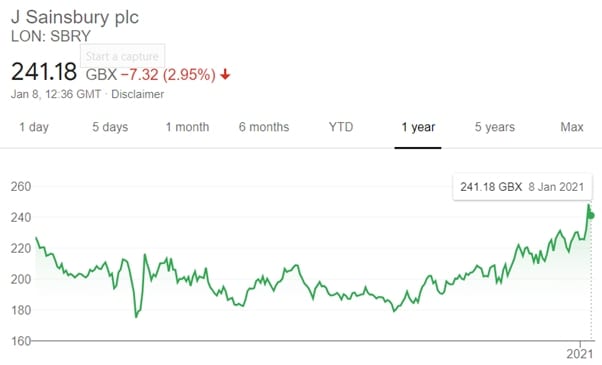 The supermarket sector in the UK is generally having reported a record December. With bars and restaurants shut, UK households had to do all of their seasonal celebrating at home this year. And we were clearly determined to do so in style, treating ourselves despite, or perhaps because of, the pandemic conditions of 2020.

Other factors highlighted as contributing towards J Sainsbury’s particularly positive last quarter are a continuing boom in online orders and a sudden surge of demand for smaller turkeys after the planned relaxation of Covid rules over Christmas was abandoned. That meant many Christmas dinners originally planned to include 3 households saw their numbers reduced in accordance with the Tier system rules across the country.

Sainsbury’s is the UK’s second largest supermarket chain by market share, after Tesco, and has around 600 supermarkets, as well as 800 convenience stores around London and the southeast. New tightening of Covid-19 restrictions from November on was a boost as consumers stocked up on Christmas treats. With more spent than in previous years, it looks like shoppers ploughed some of the savings made elsewhere, like in bars and restaurants, into the budget for domestic consumption.

Simon Roberts, Sainsbury’s chief executive since May, commented on the positive results:

“Many people had to change their Christmas plans at the last minute and we sold smaller turkeys and more lamb and beef than normal.”

Sainsbury’s brought forward its trading update by a week in order to inform investors it is upgrading its annual guidance to a pre-tax profits forecast of £330 million for the year ending in March. The upgrade is by more than 20% on the previous guidance figure of £270 million. And with new, tighter, lockdown restrictions expected to be in place over the next couple of months, it perhaps won’t be a surprise if supermarkets benefit again and the final total is even higher.

However, despite the boost to revenues, Sainsbury’s annual profits are actually tipped to come in at 44% lower than the £586 million booked a year ago. That’s due to the company incurring pandemic-related costs of £290 million, making its supermarkets and logistics hubs safe for staff and shoppers, as well as ramping up deliveries and online order fulfilment capacity.

Online orders were up 128% over the period. Over the ten days before Christmas, 1.1 million orders were home delivered. Total digital sales, including those made by Sainsbury’s-owned Argos, accounted for as much as 44% of group sales. The surge in online demand, and higher value of baskets, have made online groceries finally profitable for Sainsbury’s. Before the upswing in demand this year, tighter margins on online orders meant supermarkets struggled to make money on them.

Last January, Sainsbury’s had the capacity to fulfil up to 340,000 online order per week, which was scaled up to 830,000 over the course of 2020. Click-and-collect shopping, where shoppers place their order online but pick it up from the supermarket rather than having it delivered, has also grown in popularity. With no delivery involved, click-and-collect provides better margins.

Argos sales, up 8.4%, benefited from an increase in the number of customers paying for fast-track delivery ahead of Christmas. However, general merchandise sales in Sainsbury’s supermarkets was down 5.4%. That was attributed to the fact the group decided to stop selling television sets and games consoles.

Like supermarket peers Tesco and Morrisons, Sainsbury’s last month said it would return the business rates relief it had received during the pandemic, due to strong trading performance over the period. The relief amounted to £410 million.

The Sainsbury’s share price has pulled back by almost 3% today.

Moonpig could launch £1 billion IPO as soon as next week

Time to look for value in beaten up...

Should you be investing in biotech as a...

It might be time for investors to position their portfolios to take advantage of... END_OF_DOCUMENT_TOKEN_TO_BE_REPLACED

Cybersecurity firm Darktrace has announced plans for a London IPO in a move that... END_OF_DOCUMENT_TOKEN_TO_BE_REPLACED

20 years ago, an investment in the current generation of giant technology companies such... END_OF_DOCUMENT_TOKEN_TO_BE_REPLACED