Weekend reports suggest Sainsbury’s, the UK’s second largest supermarket chain by market share, is set to become the next target of takeover offers as the battle for rival Morrisons moves into its final stages. The bidding would be expected to start at upwards of £7 billion, the price at which the Morrisons board last week recommended shareholders accept an offer from American private equity group Clayton Dubilier and Rice (CD&R). 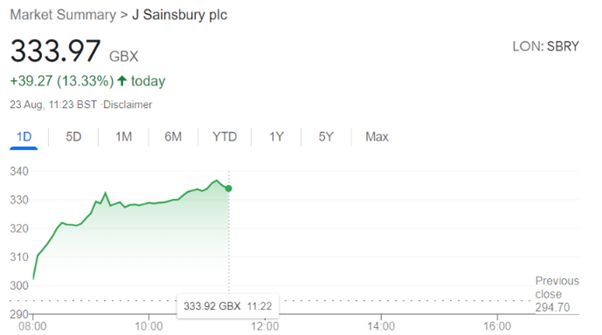 Apollo, another buyout group from the U.S., is credited with the most advanced, if still exploratory, interest in Sainsbury’s but would be expected to face competition. With the Sainsbury’s share price closing on Friday at 294.7p after gains of over 30% so far this year the weekend reports were always likely to spark another sharp rise today. The Morrisons share price closed on Friday at 291p-a-share, 6p above the recommended offer for the company.

Apollo, which manages $88 billion of assets, has experience of the groceries sector after last year investing $1.75 billion in U.S. supermarket chain Alberstron, which owns the Safeways brand. 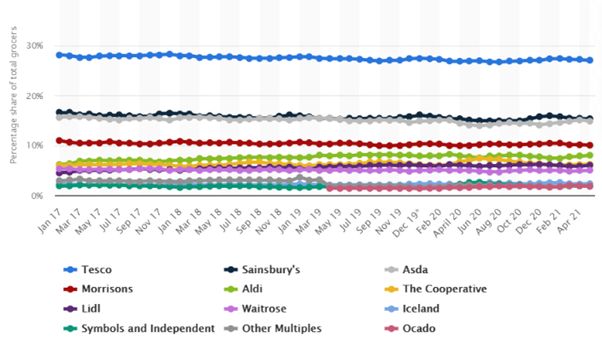 With Sainsbury’s holding around 15% market share in the UK’s groceries market to Morrisons’ 10%, the supermarket still looks potentially undervalued at its current level despite strong gains over the past year.

Apollo is also in talks to join the Fortress consortium bidding for Morrisons and could provide extra financial muscle should the latter choose to again up the ante to improve on CD&R’s 285p offer. The current Morrisons share price of 291p indicates confidence the bidding isn’t quite finished yet.

However, interest in a potential offer for Sainsbury’s could well sharpen if Apollo doesn’t ultimately become a significant shareholder in Morrisons. Despite being the larger of the two chains by market share, Sainsbury’s is less profitable than Morrisons thanks to the latter’s stronger presence in more affluent parts of the UK. However, it also has strengths over its rival such as a well developed online business (a notable weakness of Morrisons who work with partners like Amazon) and a chain of smaller convenience stores.

American private equity is being drawn to the UK’s largest supermarket chains due to a perception they have been undervalued for a number of years and their extensive property portfolios. Figures in the City also say they see significant future scope to improve efficiency through smaller, optimised stores and more automation, especially across logistics facilities.

The Sainsbury’s share price rise over recent months has been spurred along by rumours of takeover interest from Czech energy billionaire Daniel Kretinsky. In April the ‘Czech Sphinx’ acquired over £100 million of Sainsbury’s stock from the Qatar Investment Authority. He has also built up stakes in German wholesaler Metro and France’s Casino supermarket chain. Between them, Kretinsky and the Qatari fund own almost 25% of Sainbury’s.

In recent years several attempts have been made to take Sainsbury’s private. Private equity house CVC tried in 2007 were thwarted by the Sainbury family. However, the family now only own around 3% of the company having sold down their stake over the years since. Much of that stock has been bought up by the Qatar Investment Authority who launched, then abandoned, a £10.6 billion bid in 2016 as part of a consortium that also included CVC and Brookfield. They snapped up Argos instead.

Despite recent valuation gains on takeover hopes, the 60% premium CD&R has agreed to pay for Morrisons on its share price before news of interest broke would be expected to inflate the Sainsbury’s valuation well above its current £6.9 billion.

Higher prices do, however, raise questions around how a return on investment will be achievable without selling off stores and leasing them back. CD&R’s bid for Morrisons includes a commitment not to do so but presumably means other assets will be sold. The supermarket’s warehouse property portfolio is estimated as worth around £512 million and manufacturing assets £250 million. The valuations are based on the presumption of 15-year sale-and-leaseback agreements being struck.