Santa? Is that you? FTSE ends on high note after UK and US inflation improves 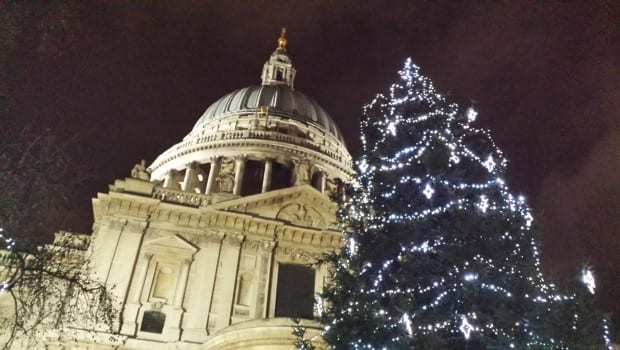 The FTSE closed 2.25% higher on Tuesday to 6,018 points after data showed improvement in UK and US inflation.
UK inflation returned in November with a 0.1% rise compared to a year ago, as expected by analysts, following a 0.1% decline in October, the Office for National Statistics revealed.
On month-on-month comparison, the consumer price index came in at 0.0% in November, better than the 0.1% drop that was forecast but worse than the previous month’s 0.1%.

The Bank of England is targeting 2% inflation.
In the US, inflation rose 0.5% in November from a year ago, matching analysts’ estimates and marking an improvement from the previous month’s 0.2% increase, according to the Bureau of Labor Statistics.

However, CPI fell to 0% in November on a month-on-month comparison, after a 0.2% rise in October, meeting forecasts.

James Hughes, chief market analyst at GKFX, said the improvement in year-on-year inflation paves the way for the Federal Reserve to raise interest rates on Wednesday when the central bank wraps up its two-day policy meeting.

“As far as the inflation story alone goes, we must wait for the Core CPE reading before taking stock of the full picture, but today was all about not upsetting the Fed’s preparations, and it seems we have come through unscathed,” he said.

In other US data, sentiment among US housebuilders remained fairly flat in December, according to the National Association of Home Builders/Wells Fargo. The housing market index nudged down one point to 61, a touch below estimates for a reading of 62 but comfortably above the 50 threshold that indicates improvement.

The Empire State general business conditions index, which measures manufacturing conditions in the New York area, rose to a reading of -4.6 in December from -10.7, beating the -7 estimate.

Coca-Cola HBC AG rallied as the bottling company revealed it had purchased 100,000 of its shares for an average price of 1,433.66p on 12 December and cancelled them.
Supermarkets rose after the latest Kantar Worldpanel data. Sainsbury’s continued to thwart its rivals in recent weeks, increased sales and grew its market share as Tesco, Asda and Morrisons all saw sales fall.

Anglo American declined after JP Morgan slashed its price target on the company from 450p to 265p.

Glencore jumped after JPMorgan upgraded the stock to ‘overweight’ from ‘neutral’ with an unchanged target price of 160p.

Tullow Oil climbed after saying it discovered 102 metres of net oil pay in two columns at its Etom-2 well in Northern Kenya.

Serco was on the back foot after doing a U-turn on the sale of its Environmental Services and Leisure businesses.

Aveva Group plunged on news it had terminated takeover talks with French suitor Schneider Electric after the pair were unable to reach agreement.

Oil futures registered further upticks on Tuesday, extending gains made late in the previous session, even though Brent continues to lurk near seven-year lows.

The Brent front-month futures contract was up 1.56% or 59 cents at $38.51 per barrel, still close to price levels last seen in December 2008. Concurrently, WTI was up 2.15% or 78 cents at $37.09 per barrel.
Earlier in the session, Moody’s cut its oil  price assumption for 2016 due to the threat of prolonged oversupply, lowering Brent estimates to average $43 from $53 per barrel next year, and WTI to $40 from $48 per barrel.
The ratings agency said continued high levels of oil production by global producers were significantly exceeding demand growth, predicting the supply-demand equilibrium will only be reached by the end of the decade at around $63 per barrel for Brent.

With the oil market already saturated and facing the imminent return of Iranian crude, limits of on-shore storage  capacity look set to be tested in the first half of 2016, according to Edward Morse, senior analyst at Citi.

If onshore storage approaches the top of the tanks, Brent futures may need to fall to approximately $30 per barrel, he added.
Away from the oil market, most metal futures headed lower during late afternoon trading in Europe. At 1635 GMT, three-month delivery contracts of primary aluminium (down 1.3%), tin (down 0.3%), lead (down 0.4%), nickel (down 0.9%) and zinc (down 2.2%) were firmly in negative territory on the London Metal Exchange.

Liz Grant, senior account executive at Sucden Financial, said, “LME prices headed downwards again to test the lower end of the recent ranges. With the US Federal Reserve meeting tomorrow, the market has factored in a 75% chance of a rate hike and after the weakness seen on Monday, short covering ahead of the Fed saw values in the major equity indices rally sharply while gold prices moved lower to test support at $1,060 levels.”

The dollar rose against a basket of global currencies on Tuesday, as the US Federal Reserve began its two-day policy meeting where it is tipped to raise interest rates by 25 basis points.
At 1540 GMT, the dollar was up against the yen by 0.40% changing hands at JPY121.51. Meanwhile, the pound fell against the greenback to exchange at $1.5097 down by 0.30%, while the euro fell 0.47% versus the greenback to change hands at $1.0940.

Jane Foley, senior FX strategist at Rabobank, said, “A more confident tone from the Fed on the outlook for both the US economy would likely chase EUR/USD lower particularly if Chairwoman Janet Yellen manages to hike US rates without sparking a sell-off in risk assets.

“If risk assets are spooked by the Fed tomorrow, however, downside potential for EUR/USD could prove to be limited.”
Commodity linked currency crosses also headed lower with the Australian dollar down 0.69% against its US counterpart exchanging at US$0.7192. Meanwhile, the New Zealand dollar was broadly flat to change hands at US$0.6763. The greenback also rose 0.03% against the Canadian dollar exchanging at CAD$1.3736.

Kit Juckes, head of forex at Societe Generale, said, “Outside the forex market, the big risk comes from the weight of positions in spread product in fixed income and in emerging market assets, still. Longer-term flows of capital out of risk assets would usually be dollar-supportive but in the FX market, the big net position is still, clearly, long US dollars.

“Perhaps the combination of risk reduction and shedding of dollar longs built up ahead of the start of the rate hiking cycle is what has driven the dollar down relative to the yen after previous hikes. What is clear today though, is that the short-term pre-FOMC risk is of a break higher in EUR/USD for no better reason than positions reduction, and of USD/JPY drifting lower at the same time.”

US housebuilder confidence nudges down in December

That the international travel sector is, thanks to the Covid-19 pandemic, in a bit... END_OF_DOCUMENT_TOKEN_TO_BE_REPLACED

With a growing number of economists arguing there is a high chance we are... END_OF_DOCUMENT_TOKEN_TO_BE_REPLACED

While most still caveat the argument with the get-out clause it is far from... END_OF_DOCUMENT_TOKEN_TO_BE_REPLACED

Natural gas prices have rocketed with Russia accused of managing supply to drive up... END_OF_DOCUMENT_TOKEN_TO_BE_REPLACED

After their valuations boomed in 2020, the UK’s online fast-fashion giants of Asos and... END_OF_DOCUMENT_TOKEN_TO_BE_REPLACED