Amin Nasser, chief executive of Saudi Aramco, the Saudi state-controlled company that is the world’s largest oil producer, has said he believes Russia’s invasion of Ukraine is not the root cause of this year’s oil price shock. While Russia’s invasion of neighbouring Ukraine may have led to a temporary spike in the cost of a barrel of Brent crude to almost $124 in early March, Nasser believes the general trend of prices above $100 would have happened anyway.

Nasser said the underlying reason why sanctions against Russia and the threat of the world’s third and second largest producer of oil and gas respectively cutting exports to countries it considers unfriendly had such an impact on prices was because the world was anyway running on less than 2% spare capacity. 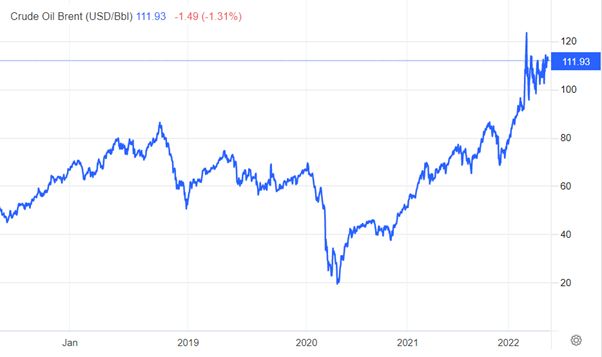 He commented this weekend at the World Economic Forum in Davos:

“What happened in Russia-Ukraine masked what would have happened. We were going through an energy crisis because of a lack of investment. And it started to bite following the pandemic.”

Nasser said that before the pandemic the aviation industry was accounting for 2.5 million barrels of oil a day more than it does now. But that rising demand from the industry and a general uptick in demand across the global economy last year, a trend that accelerated this year, was stretching supplies to breaking point. The Ukraine was simply the straw that broke the camel’s back.

Nasser believes tight global supply lacking the elasticity to adapt to economic cycles is a result of a lack of investment in the industry in recent years. He blames that on messaging such as that delivered by the International Energy Agency last year that claimed oil demand had started to fall and no new investment was needed.

He criticised the current transition towards renewable sources as poorly thought out and lacking in any margin for error or dialogue, commenting:

“We need a more constructive dialogue. They say we don’t need you by 2030, so why would you go and build a project that takes six to seven years? Your shareholders will not allow you to do it.”

“There is no good plan . . . When you don’t have plan B ready, don’t demonise plan A. The pressure and the rhetoric is. ‘Don’t invest, you will have stranded assets.’ It makes it difficult for CEOs to make investments.”

He also told the world not to rely on Aramco and Saudi Arabia to solve the current oil supply crunch, saying that it was not practically possible for the company to respond to international pressure to expand capacity quickly. It currently has a plan in place to expand capacity from the current 12 million barrels a day to 13 million a day by 2027 and is sticking to it, stating:

“If we could do it [expand capacity] before 2027, we would have done it,” he said. “This is what we tell policymakers. It takes time.”

However, he also warned global demand will rise further when China drops Covid restrictions and that strategic mistakes transitioning from oil and gas to renewables over coming years will result in an increase in the use of coal by Asian economies:

“For policymakers in those countries the priority is to put food on the table for their people. If coal can do it at half the price, they will do it with coal.”

Aramco, he said, is simultaneously investing in fossil fuel capacity and transitioning towards renewables, suggesting a lack of external pressure allowed it to do so in contrast to Western oil and gas producers. The message was others have to do the same:

“That is our difference from others but what we are adding is not enough to meet the energy security of the world.”

However, the higher oil prices in recent months have undoubtedly benefitted Aramco, raising questions over the objectivity of the company’s position and if it is genuinely unable to increase production at a faster rate. Prices comfortably above $100 a barrel saw the company, the world’s second largest behind only Apple, report a net income of $39.5 billion for the first three months of the year compared to $21.7 billion over the same period a year earlier.