Three weeks ago Bloomberg broke the news asset manager Schroders had seriously investigated a £7 billion acquisition of FTSE 100 peer M&G. Reports suggested the plan would have been to break M&G up, retaining the asset management business to create a £1 trillion investment giant, and offloading the insurance business.

Ultimately, Schroders decided against pursuing the deal. The company’s chief executive Peter Harrison has now gone public with the core reason why – fears M&G’s corporate culture would not prove a fit with its own.

Speaking for the first time about the deal that never was, the Schroders chief executive said that he had few worries about the monetary size of the deal but was concerned about how M&G would fit into the company’s culture.

Harrison describes Schroders’ staff culture as “collegiate” and is clearly proud of the financial services company’s retention rates. He himself joined the company as a graduate trainee back in 1988. He commented on the aborted M&G deal:

“For me the most important thing for protecting our long-term growth is our culture. Most of the people here joined as a graduate trainee, worked their way up, we’ve got really, really high staff retention. You disrupt that culture at your peril”

“We’re on the front foot. We’re winning lots of new money. We’re feeling positive. They [M&G], on the other hand, are having a challenging time. Assets are flowing out.”

When it was put to him in an interview for The Times that M&G going through a difficult patch is exactly what presumably made an acquisition bid interesting, buy for a lower price and bring the company up to Schroders’ standard, Harrison agreed. But added that ultimately it was decided M&G’s struggle with “culture” was “too big for us”.

For its part, Schroders is currently seen as one of the most successful asset managers in the City having won £43 billion of new business last year. In total the company manages £672 billion of assets for clients that range from small retail investors to pension funds. 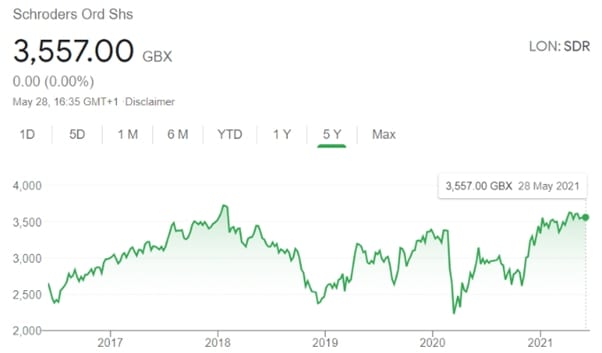 The company is currently worth £9.5 billion after a strong recovery from the coronavirus sell-off last March and employs 5500 people in total.

M&G has only been a stand-alone company since 2019 when it was spun out of Prudential. Its 6000 employees look after £367 billion in assets after £48 billion of clients funds flowed out of the company last year. It is valued at £6.4 billion.

“For me, the most important thing for protecting our long-term growth is our culture. You disrupt that culture at your peril.”

With bond yields at historical lows, they are not a particularly attractive investment for... END_OF_DOCUMENT_TOKEN_TO_BE_REPLACED

Most of the world’s investment capital is held in the stock of companies known... END_OF_DOCUMENT_TOKEN_TO_BE_REPLACED

It’s not so long ago millennials and Gen Z were being criticised for spending... END_OF_DOCUMENT_TOKEN_TO_BE_REPLACED

After a year that strongly favoured risk-on investments as stimulus cash flooded markets and... END_OF_DOCUMENT_TOKEN_TO_BE_REPLACED