With millions of usually office-based people suddenly working from home, remote communications technology companies are among the few that have benefitted from the Covid-19 pandemic. Zoom, the professional video calling app that has become a favourite with companies over the past few years, has seen subscriptions boom. Investors have been quick to try to take advantage by snapping up shares in the company.

Unfortunately, thousands have been buying shares in the wrong company, leading the SEC to step in late last week to stop U.S. investors buying stock in Zoom Technologies – a small cap company from Delaware listed in Beijing. The Zoom investors intend to buy is called Zoom Video Communications and is listed on Wall Street’s Nasdaq exchange.

The Securities and Exchange Commission has halted trading of the Beijing-listed Zoom, which trades under the tick ZOOM, until April 8th, releasing a statement that the action had been taken because investors were “confusing this issuer with a similarly-named Nasdaq-listed issuer . . . which has seen a rise in share price during the ongoing Covid-19 pandemic”. 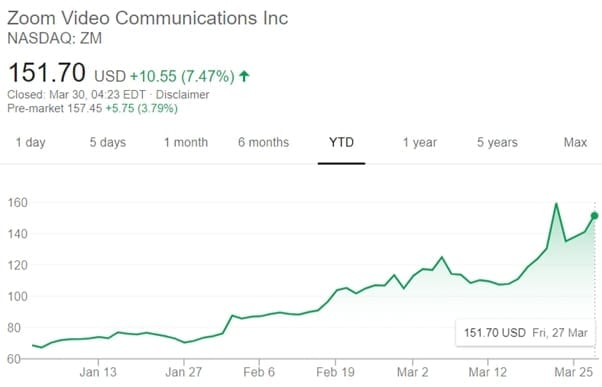 The real Zoom, Zoom Video Communications (ZM), has seen its share price gain 120% since the beginning of the year. Having gone public in April last year, the company’s market capitalisation has reached over $40 billion. However, China’s Zoom Technologies has done even better – at one point, surging to an 1800% gain for the year. Chinese Zoom is a much smaller company, with a valuation of just a few million dollars before this year’s unexpected demand for its shares pushed its market capitalisation to over $30 million.  Unfortunately, those gains came as a result of mistaken identity. 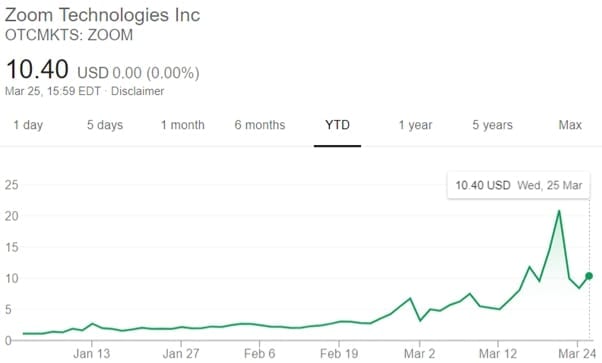 As well as moving to prevent more online investors from the USA buying shares in the wrong company, the SEC stated that it had further reason to halt trading in the company. It hasn’t reported its financial results since 2015. Beijing’s Zoom was also previously listed on the Nasdaq, before voluntarily delisting in 2014. It’s not clear if the company actually currently has any real operations, or has simply been quietly, possibly intentionally, benefiting from being mistaken for its Silicon Valley namesake.

It’s not even the first time the wrong Zoom has seen its share price surge after investors have mistaken it for its namesake. On the day Zoom Video Communications went public after an IPO last spring, Zoom Technologies also saw its share price leap 80%. The SEC said:

“The Commission cautions broker-dealers, shareholders, and prospective purchasers that they should carefully consider the foregoing information along with all other currently available information and any information subsequently issued by the company.”