The share price of Aim-listed health-tech company Sensyne has plunged by over 70% today after the company warned investors it is on the verge of running out of cash. The Oxford-based company is developing artificial intelligence algorithms to analyse patient data and plans to use it to work with pharmaceutical companies to discover medicines. But if it doesn’t secure an emergency loan note for £6.4 million it could now be forced into administration.

Sensyne Health was founded in 2018 by the former Labour party minister Lord Drayson and has access to a database of around 22.5 million patient records, including from Oxford University Hospitals, Chelsea and Westminster Hospital and South Warwickshire. The company’s largest shareholders are Lord Drayson, who is also chief executive, and his wife Elspeth. Other shareholders include the activist investor Gatemore Capital Management, which last summer put pressure on the Sensyne board to pursue a secondary Nasdaq listing. 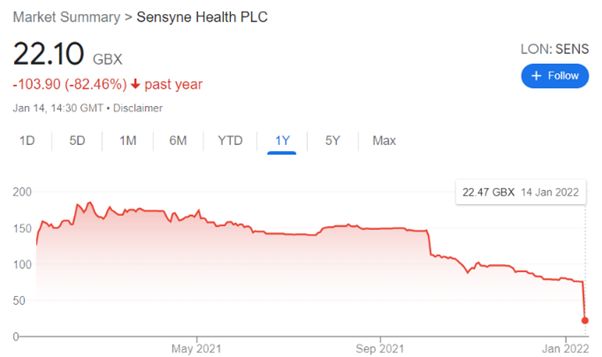 It now looks as though access to U.S. capital markets may have been a good idea after all with Sensyne since warning investors there was “material uncertainty” over its future viability as a going concern. That was back in October when the start-up reported operating losses of £27.9 million for the year to April 2021. There was also just £23.6 million of cash left in the company’s accounts and nine months later that appears to have been burned through.

One of the reasons why Sensyne may have struggled to raise more money recently is investor unrest over more than £1 million in “secret” executive bonuses that came to light and the need for the start-up to strengthen its board after several former directors left their roles.

The start-up was fined by the London Stock Exchange for what it described as “serious failures” over the reporting of the bonuses – an £850,000 payment made to Lord Drayson and a sum of £200,000 paid to Lorimer Headley, then Sensyne’s chief financial offier. An investigation by the LSE concluded Sensyne had misled its nominated adviser, the American broker-dealer company Peel Hunt, over the bonuses.

Lord Drayson would like to take the company private again and late last year approached the board for approval to speak to third-party investors who might back a management buyout. Sensyne yesterday said that progress was being made in finding a solution to secure the start-up’s financial stability and that there were both “management buy-out [MBO] and non-MBO options” being discussed with potential investors. However, there was also a warning “there can be no certainty that any offer will be made.”

In the meanwhile, £6.4 million needs to be found to allow the company to continue to operate until a sale is complete. Without it, Sensyne said it would “unlikely to be able to continue to trade beyond early February 2022.”

The Sensyne share price, which was 175p when the company listed in August 2018, has fallen to new record lows of just over 22p today. The stock exchange twice paused trading of Sensyne share this morning for five minutes at a time. The move acts as a form of circuit breaker and helps prevent algorithmic trading from driving a company’s value down to nothing when its share price suffers a sudden, heavy loss that activates stop losses and automated short positions.

The start-up did, however, confirm it had signed a “non-binding term sheet with a number of its institutional shareholders to provide £6.35 million of capital” via a loan note. And another £5 million, “which may be provided by mutual consent” if further funds are needed to keep the business going until a sale can go through.