The share price of online real estate agent Purplebricks has dropped just under 6% today having been down as much as 8% in early trading. Investors have taken fright at the announcement that chief executive and founder Michael Bruce has been forced out by the company’s board with immediate effect. The company’s share price has now crashed by over 60% in the last twelve months – the result of a disastrous push into aggressive international expansion that has gone badly wrong. 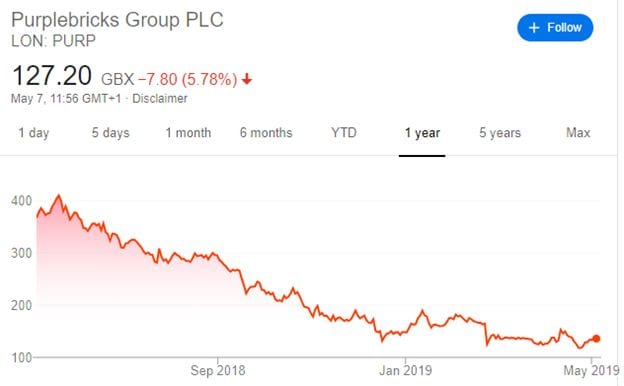 Things started well for Purplebricks and by July 2018 the company’s accounts claimed it had ‘sold’ 3.1 times more properties than any other UK estate agent. That was the first time investors had been provided with sales figures.
However, there has been controversy over how Purplebricks defines a ‘sale’. The company is paid upfront regardless of whether or not a property on its books is actually sold through it or not and its published accounts only provide data on properties ‘sold subject to contract’. Which really means Purplebricks has received its fee and not that a property has actually been sold.

For years the business model appeared to be working. Purplebricks’ average fee, which varies based on the projected value and location of a property, is £849. The average commission earned by traditional real estate agents is around £3400. Sellers of more expensive properties could easily make savings in the five figures by successfully selling their home or investment property through Purplebricks. Revenues grew quickly – up over 80% in the fiscal year ending April 2018.

A strategy of international expansion was adopted with moves in the U.S., Canadian and Australian markets. However, they have proven disastrous. The Australian unit has now been shut down having incurred significant costs and operating at a loss and the U.S. expansion has been placed ‘under review’ following the effective sacking of Bruce. He had been located in Los Angeles overseeing the U.S. unit’s set-up and expansion.

“We are very conscious that the group’s performance has been disappointing over the last 12 months and we sincerely apologise to shareholders for that”.

“With hindsight, our rate of geographic expansion was too rapid and as a result the quality of execution has suffered. We have also made sub-optimal decisions in allocating capital. We will learn from these errors and will not make them again.”

With the company’s core UK business still relatively strong, said to be outperforming competitors despite a currently challenging property market, investors will retain hope Purplebricks can turn things around. Analysts at Investec have said that they would value only the British business at 150p a share, which is significantly more than the company’s current 127p share price.