Over the past 12 months anyone investing online in legal marijuana stocks won’t have needed a puff on a joint to get a buzz as the share prices of major companies in the sector have risen by up to 400%. Canopy Growth, recently the recipient of a $4 billion investment by Constellation Brands, the Fortune 500 company that owns the Corona beer brand, is at the upper end of that share price growth range.

Peer Cronos has also gained circa. 400% compared to where its share price was last September and other companies such as Aurora and Aphria are up 210% and 190% respectively. 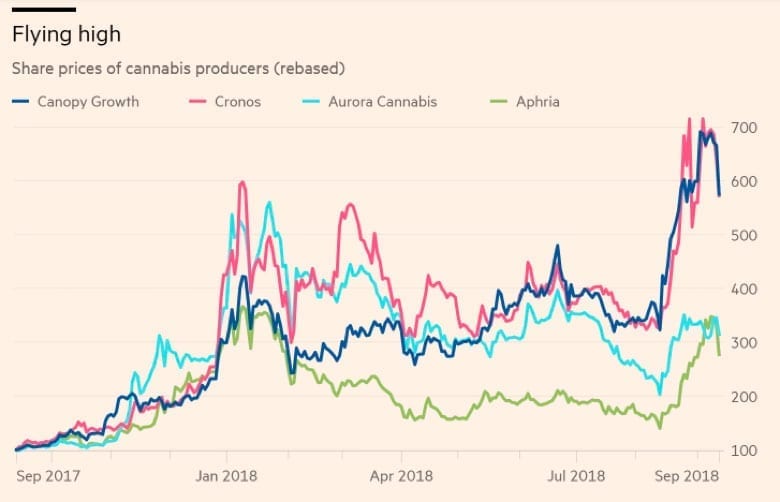 The Constellation – Canopy Growth deal was certainly a catalyst to drive the rally higher but share prices had been on a steep upward trajectory before that with investors enthused by the prospect of a legal recreational and medical market for the drug across North America. Recreational use will be legal in Canada from next month and more and more states in the U.S. are following suit, either for medical marijuana (almost half of all states), recreational use (now 9 states) or both. Legal global spending on marijuana is forecast to hit $32 billion by 2022 from $9.5 billion currently.

As well as those investing online enthusiastically piling into the marijuana stocks, institutional investors are getting on board. The industry has also been boosted by a recent spate of M&As as smaller players consolidate to take on the increased scale of the market that is impending. The big boys of the established beverage and tobacco companies are also rapidly mobilising, seeing the legalisation of cannabis as both a huge growth opportunity and threat to their own existing markets.

Until recently, all the major ‘pot stocks’ were listed on Canadian stock exchanges with the biggest trading on the Toronto exchange. However, in July this year Canadian company Tilray opted for the deeper pockets of its neighbour to the south’s capital markets by choosing New York for its IPO. It’s worked out well so far with the stock up almost 500% to $120.19 yesterday from its starting price of $22.39 on July 19th.

The huge potential of the legal marijuana market is not confined to the drug being smoked as buds or consumed as oil. Many expert observers believe that it will also prove popular as a supplement or additive to other products. The twist that is expected to turbo-charge the ‘new’ industry is that it is not really new at all. BDS Analytics MD Linda Gilbert commented:

“If we look at the cannabis plant, or hemp or marijuana, there are hundreds of different cannabinoids that could become new flavours or aromas for a beverage. The bottom line is that cannabis is not new, people have been consuming cannabis for centuries. What’s new is legal cannabis. It’s very rare for an entirely new category of product to become an investment opportunity.”

Are We On the Brink Of The Next Major International Financial Crisis? The Case For And Against

Despite the ravages of the Covid-19 pandemic the UK’s renewable energies generation capacity grew... END_OF_DOCUMENT_TOKEN_TO_BE_REPLACED