Royal Dutch Shell, traditionally the FTSE 100’s biggest dividend payer, has chosen not to follow the lead of oil major peer and rival BP and maintain its dividend despite the oil price crash. The company has opted for what it describes as the ‘prudent’ decision to cut its first quarter dividend by 66% after profits halved. The decision was, however, just as influenced by the deteriorating and uncertain economic outlook as the immediate impact on profits the oil price plunge has resulted in.

“Given the risk of a prolonged period of economic uncertainty, weaker commodity prices, higher volatility and uncertain demand outlook, the board believes that maintaining the current level of shareholder distributions is not prudent.”

Shell’s first quarter profits came in at $2.8 billion, approximately half of what was generated over the same three months a year ago. The company told investors that it expects demand for oil to remain depressed for some time with the statement:

“The pace and scale of the societal impact of Covid-19 and the resulting deterioration in the macroeconomic and commodity price outlook is unprecedented. The duration of these impacts remains unclear with the expectation that the weaker conditions will likely extend beyond 2020.”

Shell’s share price dropped by around 6% this morning on the announcement that the company’s dividend would be reduced to 16 cents a share from 47 cents a share. Having paid shareholders a total of £11.6 billion in dividends last year, Shell was not only the biggest dividend payer in the UK, but one of the biggest in the world. However, it now loses its income stock crown to BP, who yesterday announced it had chosen to take on more debt in order to maintain its dividend at previous levels. 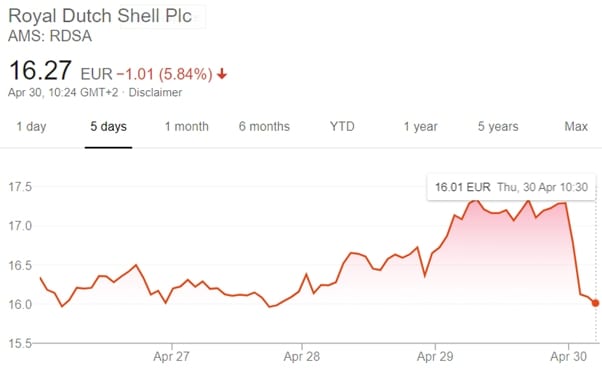 Shell had already announced plans to cut capital expenditure by $5 billion this year and operating costs by up to $4 billion. It had suspended its share buyback programme and secured extra debt facilities.

Otherwise, away from the headline cut to the dividend, Shell’s first quarter results came in ahead of analyst forecasts. That silver lining was, however, carefully couched in realism that lower prices, and production, over the second quarter is likely to mean the company’s situation will continue to deteriorate over the short to medium term. The company said:

“Due to demand or regulatory requirements and/or constraints in infrastructure, Shell may need to take measures to curtail or reduce oil and/or gas production, LNG liquefaction as well as utilisation of refining and chemicals plants and similarly sales volumes could be impacted. These measures would likely have negative impacts on Shell’s operational and financial metrics.”

“The global economic decline and uncertain outlook may have a significant impact on our profitability, cashflow and our balance sheet. We are taking decisive action to reduce our spending, increase our liquidity and effectively position our business to manage through the deteriorating macro-economic and commodity price outlook”.

“After extensive valuation of this outlook we have taken the decision to rebase our quarterly dividend, starting this quarter. This prudent step will reinforce our resilience, it will preserve the strength of our balance sheet and support value creation in the long term.”

To conclude, chairman Mr Holliday attempted to offer investors reassurance that Shell is battening down the hatches now with a view to maintaining a strong position to take advantage when market conditions ease.

“As conditions allow, the board will continue to evaluate our capital allocation priorities between ongoing investment in our business, maintaining a strong balance sheet and increasing returns to shareholders which remains our ambition.”