Shell promises to hand over billions to shareholders

After being forced into cutting its dividend for the first time since the Second World War last April, Royal Dutch Shell yesterday promised to hand over billions to loyal investors within weeks. The London-listed energy giant was obliged to act as the Brent crude price plummeted to as low as $20-a-barrel through a combination of oversupply and the bottom falling out of demand at the start of the coronavirus crisis. 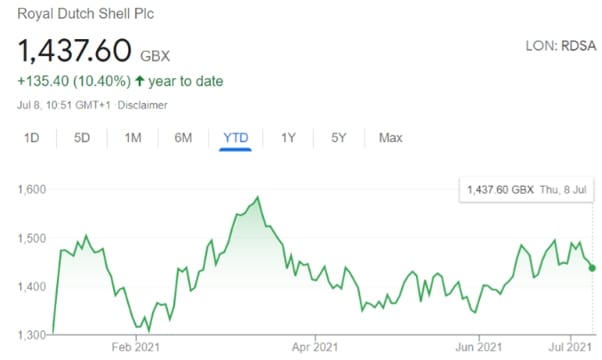 While demand is yet to return to pre-pandemic levels, oil prices recently rising to a three-year high of over $75-a-barrel has helped Shell pay down some of its debt. Having taken a chunk out of it the company has decided it is again in a strong enough financial position to return cash to shareholders. It’s not yet clear if that will be in the form of a hike in dividends or a share buyback.

The energy giant, which has committed to transforming itself into a net-zero emitter by 2050, announced it is ready to “move to the next phase of our capital allocation framework”. That will see, subject to board approval, Shell “increase total shareholder distributions”, from its second-quarter results announcement to be made July 29.

The company had promised investors it would either raise dividends that were cut by two thirds last year or share launch buybacks once it had brought net debt below $65 billion. It was at $71.3 billion when last reported at the end of March and may have since been brought down further.

However, there was speculation the $65 billion target may not have been met after the company said it would“retire its net debt milestone of $65 billion”. Shell also said it

“expects to have further reduced its net debt, although the extent of the reduction will be moderated by working capital movements.”

The announcement was made as Shell provided investors with an update ahead of its second-quarter results being published at the end of the month. The company’s stated policy is to return 20% to 30% of cashflow from operations to shareholders. Operations cashflow is boosted by around $6.4 billion for every $10 of oil price increases. Adjusted earnings gain about $5.2 billion.

Analysts estimate that will mean Shell increasing distributions by between $750 million and $1.5 billion per quarter. The Shell share price has gained 10.4% since the start of the year.

2020 was a disaster for income investors as the onset of the coronavirus crisis... END_OF_DOCUMENT_TOKEN_TO_BE_REPLACED

With gains of 21% since the beginning of the year, commodities has been the... END_OF_DOCUMENT_TOKEN_TO_BE_REPLACED

The London-listed mining company Rio Tinto has just announced it will pay out record... END_OF_DOCUMENT_TOKEN_TO_BE_REPLACED

Since he founded it as an online bookseller from the garage of his rented... END_OF_DOCUMENT_TOKEN_TO_BE_REPLACED

Last month the board of Wm Morrison, the UK’s fourth largest supermarket chain by... END_OF_DOCUMENT_TOKEN_TO_BE_REPLACED