A shift in UK government priorities back towards increasing domestic energy supplies has had one of its first major outcomes in the announcement that London-listed oil and gas giant Shell has won regulatory approval for a new North Sea gas project. The Jackdaw project should now produce up to 6.5% of the UK’s total gas output once up and running. Now that regulatory hurdles have been cleared, production is being targeted for the second half of 2025.

Last year environmental regulators blocked the project but plans have since been revised and have now won approval. However, the project being waved through now may have more to do with a new urgent need for improved energy security after Russia’s invasion of Ukraine than the revisions to the plan. 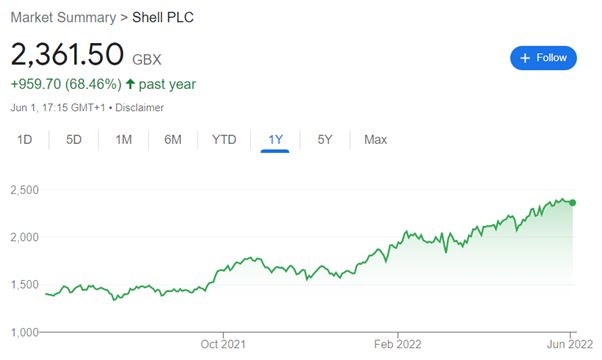 The UK government is chasing aggressive carbon footprint reduction goals with net zero status targeted for 2050. To achieve that, we will have to almost entirely cut fossil fuels from our energy diet and that is the aim. However, the disruption to international oil and gas markets over the past few months has raised alarm bells over the UK’s energy security over the period until renewables and nuclear capacity can pick up the slack.

Jackdaw, which was originally licensed as far back as 1970, gaining full regulatory approval is part of that new approach. Yesterday the business secretary Kwasi Kwarteng tweeted in response to the news:

“We’re turbocharging renewables and nuclear, but we are also realistic about our energy needs now. Let’s source more of the gas we need from British waters to protect energy security.”

Climate campaigners were less enthusiastic with Greenpeace labelling the regulatory approval as “desperate and destructive” and indicative of the Government having “no long term plan”.

Approval for Jackdaw also comes just a week after the Government backtracked on its previous position by subjecting the UK’s oil and gas sector to a windfall tax designed to help British households cope with spiralling energy bills. High oil and gas prices have seen companies like Shell and BP bank record profits over recent months but fed through to a 54% rise in energy bills in April when the cap was lifted. They are expected to rise by another 42% in October the next time the cap is reviewed.

While the windfall tax will go towards giving households grants towards higher bills now expected to average £2800 a year, the oil and gas sector has heavily criticised it as discouraging investment. Shell itself last week stated the levy creates “uncertainty about the investment climate for North Sea oil and gas for the coming years”.

It is not believed the windfall tax will impact Shell’s investment strategy for Jackdaw, which was already confirmed. But earlier this year the company said it planned to invest between £20 billion and £25 billion in the UK energy system over the next 10 years. There were worries if the extent of that commitment might be compromised by the short-term tax.

However, Shell did release a statement today on securing full approval for Jackdaw that suggested that isn’t the case, while pointedly indicating it will depend on future government policy, with a spokesperson stating:

“Responsibly produced, local gas production plays an essential role in the UK’s transition to net zero, will support thousands of jobs and forms part of Shell UK’s broader intent to invest £20bn to £25bn in the UK, with 75pc intended for low and zero-carbon products and services.”

“However, as we have repeatedly stated this can only happen with a stable fiscal policy and we continue to look to the government for those assurances.”

Jackdaw contains reserves of between 120 million and 250 million barrels of oil equivalent. A Government spokesperson commented:

“Sourcing gas locally in the North Sea makes us less than dependent on foreign imports and produces less than half the carbon footprint of imported gas.”

“There will continue to be ongoing demand for oil and gas over the coming years as we transition to cleaner, lower carbon energy – this ensures we protect British energy security, jobs, and industries, without becoming more dependent on foreign imports.”