Anlgo-Dutch energy giant, Royal Dutch Shell, saw its share price drop 3.43% after it delivered third quarter earnings that revealed a disappointing 15% drop on the same period in 2018. The slump was attributed to a combination of lower energy prices as well as poorer refining and chemicals margins. Shell also warned investors that there is “uncertainty” around the timetable of its plans to reduce debt levels and the pace at which a share buyback will take place. 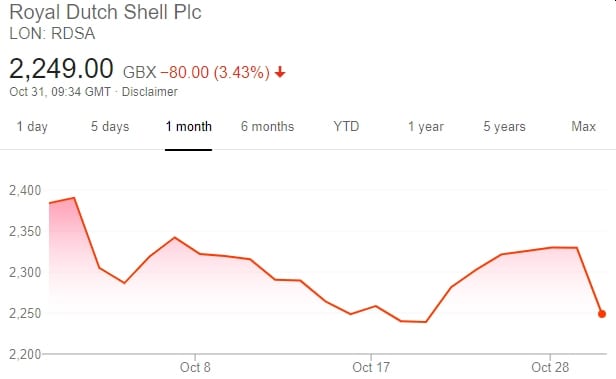 On a current cost of supply basis adjusted for exceptional items, the favoured metric of oil and gas industry analysts, net income over the quarter ending September 30th dropped to $4.8 billion from $5.6 billion a year ago. While a significant drop on 2018’s Q3 performance, the final figure was still ahead of analyst forecasts for an even more conservative $3.9 billion. The difference was credited to an improved energy trading performance and improved businesses from Shell’s gas business.

Within the context of the energy price drops that all oil and gas companies, particularly the largest, a group known as the ‘supermajors’, among which Shell numbers, are contending with, the fall in revenues is far from an exception. Most of the largest companies in the sector also have significant exposure to the chemicals industry, where margins are tightening. Shell CEO Ben van Beurden commented:

“The prevailing weak macroeconomic conditions and challenging outlook inevitably create uncertainty about the pace of reducing gearing to 25 per cent and completing the share buyback programme within the 2020 timeframe.”

The share buyback programme in question was a promise made to shareholders in exchange for support of its $54 billion 2016 acquisition of liquefied natural gas giant BG Group. Over the next three months $2.8 billion worth of shares will be bought back, adding to the $12 billion already returned to the company’s ownership. That leaves a little over $10 billion remaining – the timetable for which was announced as ‘uncertain’.

Shell is also making good progress in its targeted programme of cost cutting and spending has been kept on a tight leash. The company’s debt has also been dented by through the sale of $30 billion in assets. There is, however, further work to be done when it comes to reducing the company’s gearing, which has remained stubbornly above the 25% target set to be achieved by next year. Gearing is currently at 28%.

The biggest drag on revenues and profits was a 23% drop in Shell’s exploration and production division’s revenues. Production fell to 2.6 million barrels a day with divestments not yet being compensated for by a ramp-up of other projects. The downstream oil business was helped by trading performance and retail fuel earnings. Trading plus a boost in production also supported the gas side of the business.

A third quarter dividend of 47 cents a share will be distributed.