Shell has taken its valuation gains over the past 12 months to almost 65% after the London-listed energy giant today announced a record underlying quarterly profit of $9 billion for the three months to March. The company’s burgeoning bottom line, catalysed by a leap in oil and gas prices as a result of Russia’s invasion of Ukraine and international sanctions placed on the world’s third largest producer of energy commodities, has led to renewed calls for a “windfall tax “.

Shell’s adjusted earnings for the first quarter represented almost 300% growth on the $3.23 billion banked over the same period a year earlier. While there is a growing swell of voices insisting Shell and peers like BP pay additional taxes on their outsized profits to help control spiralling household energy and heating bills Prime Minister Boris Johnson effectively ruled such a move out earlier this week. 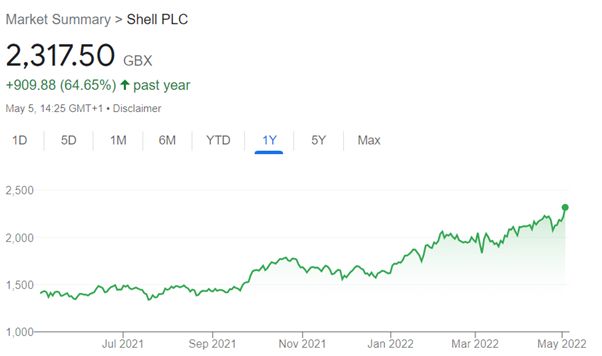 He echoed the argument put forward by the energy companies themselves that their profits also slumped over the pandemic due to reduced demand for oil and gas leading to lower prices and sales. Prices rising now, and bumper earnings resulting, is simply, say oil and gas companies, a result of the cyclical nature of the energy business.

Shell and its peers also argue that these profits will be reinvested in renewables capacity, with massive capital investment needed to meet a 2050 target for carbon neutrality. They will also fund new North Sea exploration to help improve the UK’s energy security as well as cash being returned to investors, many of whom are major pension funds, in the form of dividends and share buybacks.

However, while analysts had expected a record quarterly profit to be announced by Shell today, the $9.13 billion booked was still significantly ahead of forecasts for $8.67 billion. The figure also excludes a $3.9 billion post-tax charge booked by the company for exiting its Russian interests. That figure dampened headline profits.

Shell promised investors the elevated revenues and profits it expects to be generated this year will see it return a higher share of cash flow in the second half of the year once a planned $8.5 billion share buyback has been completed.

Oil prices reached an average $102 a barrel over the first quarter of the year compared to $62 during the same period a year earlier. Shell chief executive Ben van Beurden commented:

“The war in Ukraine is first and foremost a human tragedy but it has also caused significant disruption to global energy markets and has shown that secure, reliable and affordable energy simply cannot be taken for granted. The impacts of this uncertainty and the higher cost that comes with it are being felt far and wide.”

Shell has said that, subject to amenable government policies, it will invest up to £25 billion in the UK over the next decade with more than 75% of that in low-carbon projects including offshore wind, hydrogen, carbon capture and electric vehicle charging.

Van Beurden stress that strong earnings and cash flow would be necessary if Shell is to play “a leading role in the energy transition” as well as being “the best way for us to contribute to the security of energy supplies”.