Despite a drop of 2% on Wednesday following an announcement the cost of it cutting business ties with Russia will come in at up to $5 billion, the Shell share price is approaching the end of the week just 0.5% down over the last 5 days. The final sum expected to be booked in impairments, Shell says somewhere between $4 billion and $5 billion is higher than initially anticipated by analysts.

However, despite the heavy cost of exiting from several businesses that are either based in or connected to Russia, which has become an international pariah after it invaded Ukraine, investors have kept faith in Shell. While the war has made business dealings with Russia untenable for most Western companies, provoking expensive withdrawals from the country, it has also driven oil and gas prices up. 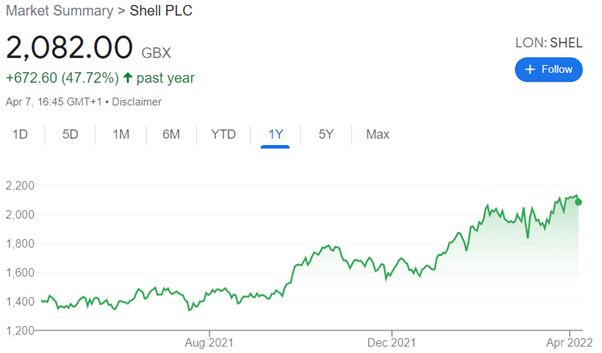 In its first quarter update this week, Shell highlighted a particularly strong performance from its trading unit. It said oil products trading profits and optimisation results for its integrated gas business, the world’s biggest LNG trader, were expected to be “significantly higher” than in the fourth quarter. Higher oil and gas prices should also see a continuation of the bumper profits of 2021 when adjusted earnings quadrupled to $19.3 billion compared to pandemic-blighted 2020.

However, there was also a warning a sustained combination of high and volatile oil and gas prices would be expected to negatively impact cash flow because of price increases affecting inventory leading to around $7 billion of outflows from the business. A statement explained:

“Reflecting the unprecedented volatility in commodity prices prevailing up to the end of the quarter, material additional movements could be seen in CFFO from margining effects on derivatives, changes in inventory volumes and in accounts payable and receivables.”

“On the one hand the volatility looks to have benefited both gas and oil trading, on the other hand there is guidance of a big outflow of working capital (initial margining, building receivables) from this trading activity. The working capital outflow means that, despite the obvious benefits of high oil and gas prices, we expect to see a modest [quarter-on-quarter] rise in net debt.”

Impairments will be taken by Shell on its exit from joint ventures with the Russian state gas giant Gazprom including a stake in Sakhalin-2, a huge LNG plant in the fas east of the country and its funding of the indefinitely suspended Nord Stream 2 gas pipeline connecting Russia to Germany. Work on the pipeline is complete and it was due to start pumping gas directly into Europe’s largest economy this year but it is now unclear if it will ever be used.

The Gazprom joint ventures will see Shell right off around $3 billion and Shell’s network of around 500 petrol stations across Russia, which is being given up, is valued at around $400 million. Additional costs, such as resetting its supply chain to exclude Russian, which will reduce throughput at some Shell refineries, will add to the final impairments total.

“the post-tax impact from impairment of non-current assets and additional charges (e.g. write-downs of receivable, expected credit losses, and onerous contracts) relating to Russia activities are expected to be $4 to $5 billion”.

The charges will not, however, affect adjusted earnings as they will be booked as one-off impairments.

Last month Shell stopped buying Russian oil on spot markets but while removing it from its entire supply chain will be done “as fast as possible” it won’t happen immediately. The company also said extracting itself from businesses involved in Russian pipeline gas and LNG represents a “complex challenge” and will take much longer.