If anyone is wondering how to offset the financial impact of power bills that are expected to rocket from April when Ofcom next adjusts its energy prices cap (something that happens bi-annually in April and October), buying shares in Shell is one idea that looks like it has some merit. The London-listed energy giant has seen its share price rise by over 6% so far this year and there may well be more to come after Shell reported soaring Q4 profits.

The strong last quarter profit figures, announced on Friday, are in large part thanks to trading profits generated by Shell’s integrated gas division, which has benefitted from higher prices. The division is the world’s biggest producer of LNG (liquified natural gas) and Shell has offered forward guidance on profits expected to come in “significantly higher compared to the third quarter 2021”. 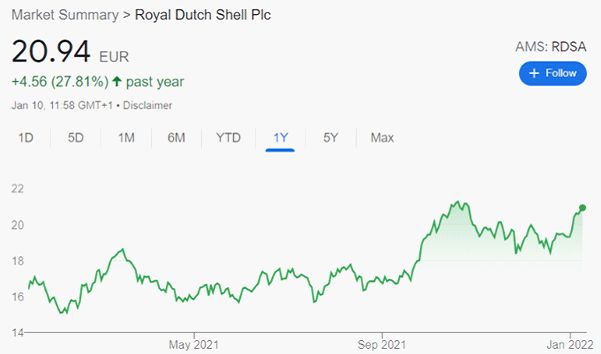 The global gas supply shortages that have driven prices up in recent months have also been contributed to by “unplanned maintenance” that saw Shell produce less LNG than expected. However, the company placed the emphasis on the division’s success in

The Friday announcement, that saw the Shell share price close 1.1% up, also confirmed the company’s plan to return $5.5 billion to shareholders through a share buyback program to be executed “at pace” following the sale of its U.S. shale business.

However, the bumper profit announcement wasn’t met with uniform positivity and led to new calls for a windfall tax on big oil and gas companies. Ministers are exploring options of how to limit the impact of spiralling energy commodity prices on the electricity and gas bills of British consumers with a new tax on oil and gas profits one of the routes under consideration.

With domestic bills facing the prospect of leaps of up to 50% from April, when the price cap is revised upwards to reflect commodity prices, Liberal Democrats renewed calls for the tax following Shell’s announcement. The party’s leader Sir Ed Davey, who was energy secretary in the Conservative-Lib Dems coalition government, stated strongly:

“Profit announcements like this are a real kick in the teeth for households struggling to pay spiralling heating costs.”

He insisted the answer to the looming crisis was to offer

“immediate support to those struggling to get by, and taxing multibillion-pound profits of oil and gas companies is a fair way of raising these funds”.

As Europe’s biggest oil and gas group, Shell would be a major target of such a tax. However, it would not go down well at all at board level, or with many investors, after Shell recently gave the City of London a boost by moving its tax base and corporate HQ to the UK from the Netherlands, discontinuing its dual share structure.

Shell is due to report its final Q4 and annual results on February 3. Four days later Ofgem is expected to give the green light to the biggest hike in household energy bills in years. Sustainable energy suppliers have been among those most vocal for a new windfall tax on highly profitable oil and gas companies to help subsidise household charges.

However, the industry body Oil & Gas UK have argued that taxing big oil and gas companies would not be a sensible option, hinting that it would be a populist measure with negative long term consequences. The body warned of “irreparable damage to the industry” that would deter investors and lead to consumers being “even more exposed to global shortages”, in future.