A heavy decline in earnings over the second quarter has seen Royal Dutch Shell’s share price drop 5% by early afternoon in London trading today. The 26% decline in earnings compared to the same three months a year earlier results from a combination of lower oil and gas prices and a decline in the performance of the company’s gas, refining and chemicals units. In cash terms, the drop in revenue equates to $1.2 billion, at $3.5 billion compared to $4.7 billion in 2018. The share price plunge is also the biggest one-day drop in more than three and a half years. 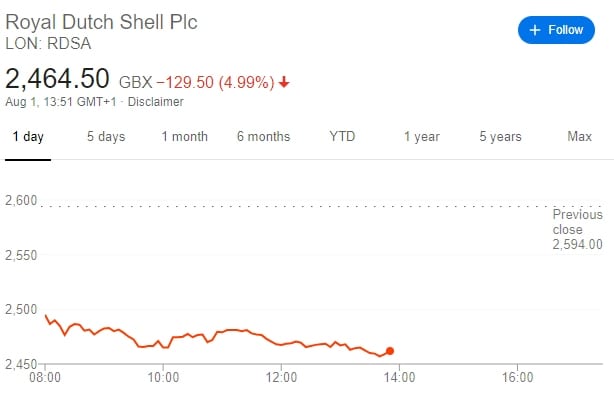 Despite the fact that lower energy prices compared to a year ago over the Q2 earnings period were obviously not news, the hefty drop in earnings still took the market off guard. Analysts had forecast a figure of $4.9 billion – a slight improvement on last year’s $4.7 billion. The extent of the miss was summed up by Panmure Gordon analyst Colin Smith, quoted in The Financial Times as commenting:

“Shell had a shocker this quarter. Earnings missed our estimates across all businesses.”

The worst offender was RDS’s integrated gas division, where earnings were down by a quarter but profits were narrower across every single unit. Exploration and production, refining and petrochemicals all underperformed. The latter is traditionally prone to vulnerability during any wider-based international economic slowdown and could be interpreted as a canary in the mine for global economic growth prospects over the remainder of the year and beyond.

However, the extent of Shell’s disappointing quarter could not be put entirely down to macroeconomic conditions and oil prices. Operational issues also played their part. Oil wells in the Gulf of Mexico not producing the output they should, a Dutch chemicals facility undergoing major maintenance work and ‘unplanned downtime’ for a Singapore plant were all unexpected factors that dented earnings.

One positive was that Shell did manage to maintain a strong cash flow from operations despite the problems. That actually increased to $11 billion from $9.5 billion last year. Free cash flow, however, dropped to $6.9 billion from $9.5 billion which, given that it is the well from which dividends or share buybacks are funded, will be a worry for investors. Shell is currently in the process of a $25 billion share buyback promised to investors in exchange for their approval of the $54 billion 2016 acquisition of BG Group.

However, Shell did not intimate that any slowdown in the buyback programme could be expected and a Q2 dividend of 47 cents was also confirmed.

Is The Turning Of The Dividend Cycle Necessarily A Bad Thing For Investors?

While most still caveat the argument with the get-out clause it is far from... END_OF_DOCUMENT_TOKEN_TO_BE_REPLACED

Natural gas prices have rocketed with Russia accused of managing supply to drive up... END_OF_DOCUMENT_TOKEN_TO_BE_REPLACED

After their valuations boomed in 2020, the UK’s online fast-fashion giants of Asos and... END_OF_DOCUMENT_TOKEN_TO_BE_REPLACED

The dust has almost settled on the months-long takeover battle between U.S.-based private equity... END_OF_DOCUMENT_TOKEN_TO_BE_REPLACED