The Shell share price has slid by 1.5% in early trading this morning after a Dutch court ordered the energy giant to speed up the rate at which it had planned to cut its footprint. Historically an oil and gas major, one of the biggest in the world, Shell, like its London-listed peer BP, has recently been very public about its transformation into a sustainable energy company.

Both Shell and BP have vowed to complete their transformation into “carbon zero” energy companies by 2050. Shells planned pace of change will, however, now have to be brought forward. The court ruling on the case brought against Royal Dutch Shell by an alliance of environment groups led by Friends of the Earth Netherlands means Shell is now, pending appeal, legally obliged to slash its carbon footprint by 45% of 2019 levels by 2030. 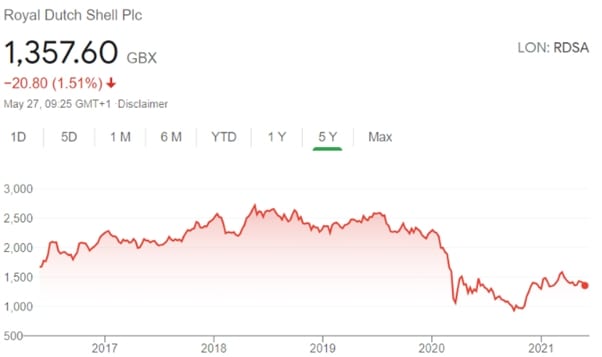 Shell will appeal against the court decision, which it labelled “disappointing”. Its position is that it must be allowed to taper its reliance on oil and gas revenues at a pace that will allow it to sustainably invest in its transformation into a carbon neutral energy company.

The current roadmap towards Shell achieving carbon neutrality is largely backloaded, with near-term targets focused on its business’s “carbon intensity”, which refers to emissions per unit of energy sold. It plans to cut those by 20% from 2016 levels by 2030 and 45% by 2035.

Critics of the strategy say that Shell’s near-term commitment to the narrower carbon intensity metric could actually see an increase in absolute emissions over the next several years.

As one of the world’s biggest oil and gas companies, last year Shell’s output was 3.4 million barrels of oil equivalent every day, the company is also one of the world’s most significant polluters. Its 2020 carbon footprint was the equivalent of 1.38 billion tonnes of CO2. To put that in context, it was about 3 times more than produced by the whole of the UK.

However, there is an acceptance that big oil and gas companies are also relied upon to invest in transforming the global energy supply into a sustainable, low-carbon one. In the meanwhile, the oil and gas they produce is still needed to keep the lights on and generate the kind of revenues needed to finance such a fundamental shift in energy technology and infrastructure.

But environmental groups believe Shell and other oil and gas majors are still not doing enough and that their journey towards lower emissions can be accelerated. The Hague court ruling sided with the argument put forward by Friends of the Earth Netherlands, 6 other environmental groups, and 17,000 people, that Shell’s current timelines threaten the goals of the Paris accord on international climate change commitments.

The court concluded Shell is indeed

“obliged to ensure … that the CO2 emissions of the Shell group, its suppliers and its customers are reduced” more quickly than planned as a result of an “unwritten standard of care”.

“not concrete, has many caveats and is based on monitoring social developments rather than the company’s own responsibility for achieving a CO2 reduction”.

Commenting on the initial win in a case that has been dubbed “The People vs. Shell”, Friends of the Earth Netherlands director Donald Pols said of the ruling which he described as “a monumental victory for our planet”:

“The judge left no room for doubt — Shell must stop its destructive behaviour now.”

“Urgent action is needed on climate change, which is why we have accelerated our efforts to become a net-zero emissions company by 2050. We are investing billions of dollars in low-carbon energy, including electric vehicle charging, hydrogen, renewables and biofuels”.

“We will continue to focus on these efforts and fully expect to appeal today’s disappointing court decision.”

Should Shell fail to have the ruling overturned on appeal it will set a precedent that would be expected to see peers including BP face similar obligations to speed up their emissions reduction roadmaps.