The Shell share price has slid again after Europe’s largest energy company posted a record $18.4 billion loss for the quarter despite managing to eke out an underlying profit of $638 million. The latter figure was well ahead of analyst expectations and the result of an impressive performance by the company’s oil and energy trading division. An underlying loss of $674 million, which would have been Shell’s first ever, had been expected. 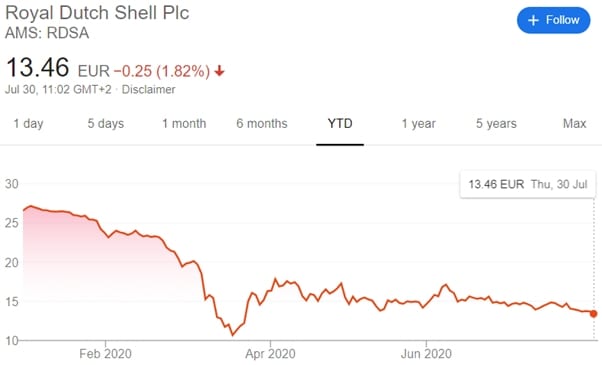 The huge overall loss for the quarter was the result of $16.8 billion of impairment charges booked as a result of Shell lowering its outlook for oil prices. With those one-off impairments stripped out, profits were down 82% on the same quarter last year, when a $3 billion profit was booked.

While the results were poor, they were expected to be even worse and the Shell share price actually briefly gained in early trading this morning before reversing into the red. Chief executive Ben van Beurden put a brave face on the company’s performance under extremely challenging market conditions and drew investor attention to the positives. He praised Shell’s success in delivering “resilient cash flow in a remarkably challenging environment”.

Europe’s biggest energy company, and until recently biggest company from any sector, Shell employs around 80,000 and produces the equivalent of around 3.4 million barrels of oil a day. Oil and gas prices have fallen off a cliff this year thanks to a combination of a slump in demand for fuel over international Covid-19 lockdowns and major producers failing to reach consensus over production cuts.

Prices are not expected to sustainably recover to the kind of levels that make for a healthy oil industry any time soon, which has had a massive impact on the finances and market valuation of companies in the energy sector. In April Shell announced the first cut in its dividend since World War II.

The company reported that its net debt rose from $74.4 billion to $77.8 billion over the three months to the end of June. Investors were also updated on billions of dollars of spending cuts planned, which the company says are one track. Underlying operational spending has already been reduced by $1.1 billion over the past three months and capital spending brought down by $1.4 billion.

The final impairments figure of $16.8 billion came in at the lower middle of the $15 billion to $22 billion range forecast. It is calculated against Shell’s near-term oil price outlook for this year and next year, which it dropped to $35 and $45 respectively from $60.

Oil prices have recovered from second quarter lows of $21 for a barrel of Brent crude to over $43 a barrel. However, Shell warned that liquified natural gas prices would have a delayed impact in the second quarter due to a lag in the pricing of oil-linked contracts for LNG. That will mean the impact of falling LNG prices will be most felt in the third quarter.

Analysts were generally positive in their reaction to the results and Shell’s delivery on cost cutting measures, praising the trading division’s performance as ‘stunning’.