The Royal Dutch Shell share price rose 3.7% yesterday, providing a welcome boost after a year that has seen the oil and gas major’s value slide by 60%. Investors were encouraged by the company’s move to raise its dividend, slashed by two thirds early this year, by 4% for the third quarter. However, chief executive Ben van Beurden also cautioned investors that 2019 was now likely to have marked the high point of the company’s historical oil production. 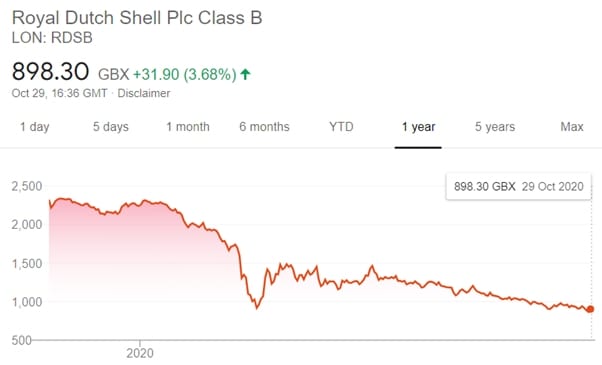 Despite the note of caution on future oil production volumes, and note that Shell sees “significant uncertainty” in the global macroeconomic outlook, the company delivered positive third quarter results that beat analyst forecasts.

Taking out one-off costs, Shell’s underlying profits for the quarter came in at $955 million – well ahead of analyst forecasts for $146 million. Net profits were, however, just $146 million, down from $6.1 billion over the same period last year. However, that still represented a huge improvement on the record $18.4 billion loss that booking significant impairments led to in the previous quarter.

There was still a $900 million impairment charge accounted for in the third quarter. The hit was taken on Shell’s Prelude LNG plant. Prelude is a floating facility off the coast of Australia.

When Shell cuts its dividend in April, it was the first time it had reduced its payout to shareholders since the Second World War. And while investors have welcomed the figure returning to growth, lower future levels of oil production and the expense involved in the company’s strategic shift to low-carbon energy, are likely to mean a full reinstatement is unlikely in the foreseeable future.

While there is no fixed target for Shell reducing its oil and gas output, with the company having committed to achieving a net zero carbon footprint by 2050. The transition to a cleaner energy mix will have to be funded by traditional oil and gas sales. But these will also have to be slowly wound down over the next three decades. Yesterday, Mr van Beurden referred to that reality with the comment that it was “probably fair to say that 2019 was the high point when it comes to our oil production”.

While the Shell dividend returning to its pre-2020 level will be a long road, whose end may never be reached, the company did promise shareholders that it would be upped every year. And that share buybacks would be resumed once the company has made further progress in reducing its debt levels.

Shell, like all oil and gas companies, is currently dealing with the combined blows of the Covid-19 pandemic’s influence on reduced travel hitting demand for oil, pushing down prices, and the need to make major investments in renewable energy capacity.

The Anglo-Dutch company is Europe’s largest energy company, employing around 83,000 people around the world. However, the company is in the process of reducing that headcount by around 9000 as part of a costs cutting strategy. Last year Shell’s oil and gas output was the equivalent of 3.7 million barrels a day. 1.9 million of those barrels was actually oil, accounting for 2% of total global production. The rest was gas.

Unlike BP, which has said its oil and gas production will be reduced by 40% by 2030 as it also pursues net zero carbon status by 2050, Shell has not set “volume targets”, for its own tapering strategy. But Mr van Beurden did say yesterday the oil and gas business would be ‘streamlined’, to focus on nine core geographies. Outside of those, existing assets will be sold off or invested less in.

Around 25% of Shell’s annual $19 billion to $22 billion annual capital expenditure will be directed towards the company’s growth businesses, including low-carbon energy.