Labelled the most disastrous London Stock Exchange debut in history after its share price plunged 26% on its opening day of post-IPO trading, Deliveroo has had a bumpy start to life as a public company. Two months on from that debut in late March, the Deliveroo share price is still trading at more than a third below the original listing price of 390p.

Shock data from Morningstar, the funds data and analysis company, now shows that only a single UK-domiciled fund has disclosed an investment in the app-based deliveries company. And only 3 funds from continental Europe have disclosed position in the stock. That means 4 from a total of 18,000 funds domiciled in Europe, including the UK. 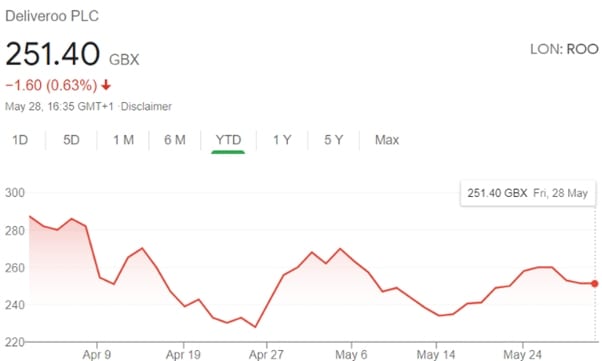 The only UK fund to back Deliveroo is, reports the FT, managed by River and Mercantile on behalf of wealth manager AFH Group. The three investors domiciled in mainland Europe are funds run by U.S.-based investment firms Morgan Stanley and Franklin Templeton and the Spain-based Enginyers Accions Europa fund.

The rest of the funds that have invested in Deliveroo are all domiciled in North America. Even during the IPO a number of high profile British fund managers, including Aberdeen Standard, L&G and Aviva, took the step of announcing they would not be investing in the Deliveroo IPO.

Reasons given at the time were concerns over the potential implications to Deliveroo’s business model that could result from ongoing legal cases challenging the employment status of the company’s gig economy delivery riders, the sustainability of its low margins business model, and corporate governance concerns over the ‘golden share’ voting rights held by chief executive and co-founder Will Shu.

Some UK and Europe-domiciled funds couldn’t invest in Deliveroo even if they wanted to as their investment strategy only permits them to invest in London-listed companies with premium listings. Deliveroo’s dual class share structure precludes the company from having a premium listing for at least three years – the term Mr Shu will retain his ‘golden share’ voting rights for.

“We would have no power to do anything [because of the rights the chief executive will hold for three years]. The CEO could run the business however he likes for years.”

Industry experts think the greater importance European investors assign to environmental, social and governance issues is one major reason why they are shunning Deliveroo. Worker employment conditions are a particular concern.

Colin Baines, investment engagement manager at Friends Provident Foundation, is quoted by the Financial Times as commenting the coronavirus pandemic had sharpened the position of many UK and Europe-domiciled funds on social issues such as work conditions. He said:

“Having Deliveroo in portfolios is a sure-fire way to flag to clients that perhaps they’re not integrating social issues [into investment decisions] that well.”

In response to reports on the Morningstar data, Deliveroo responded that over a third of its shareholding is held by investors based in the UK and include the British units of international asset managers. However, with Morningstar’s data covering 40,000 open-ended funds globally, 18,000 of which are domiciled in the UK and Europe, the suspicion would be much of Deliveroo’s domestically-held stock is in the hands of smaller retail investors, rather than funds.

UK proxy adviser Pirc’s head of stewardship Tom Powdrill believes the situation should give North American investors some cause for concern, commenting it is

“striking that those closer to the action — both in terms of the listing and where Deliveroo does much of its business — are far less likely to invest.”

“If I was a US investor I think the lack of domestic support for the stock would be something to keep an eye on.”

With bond yields at historical lows, they are not a particularly attractive investment for... END_OF_DOCUMENT_TOKEN_TO_BE_REPLACED

Most of the world’s investment capital is held in the stock of companies known... END_OF_DOCUMENT_TOKEN_TO_BE_REPLACED

It’s not so long ago millennials and Gen Z were being criticised for spending... END_OF_DOCUMENT_TOKEN_TO_BE_REPLACED

After a year that strongly favoured risk-on investments as stimulus cash flooded markets and... END_OF_DOCUMENT_TOKEN_TO_BE_REPLACED