Should China Figure In Your Thoughts When Investing Online In 2020?

Saturday January 24th marks the beginning of the Chinese New Year and will usher in the Year of the Rat. The Chinese New Year is the most significant celebration of the year for almost 20% of the world’s population. There are also signs that that the Year of the Rat will see a significant thaw in trade relations between the People’s Republic of China and the USA – the world’s most and third most populous countries and its two largest economies by some distance.

Last week U.S. trade negotiator Robert Lighthizer announced what has been called ‘phase one’ of the new deal to wind back some of the tariffs that both parties have slapped on each other’s exports over the past two years of friction. He also acclaimed the breakthrough as a “huge step forward”, offering genuine hope that peace might be reached, calling an end to a trade war that has threatened global economic growth and sent jitters through the international equities market.

These equity markets were quick to respond, driving valuations up in the anticipation of a future that again looked prosperous. Securities with exposure to China, either partly or full, rocketed up. 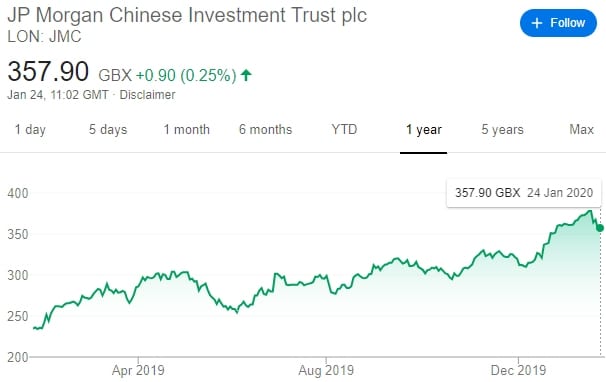 The major China-focused funds in the UK have been showing solid gains since early December as trade negotiations advanced. The Fidelity China Special Situations fund gained around 20% between early December and January 20th and 29% over 2019 as a whole. It has dipped this week on news of the Coronavirus outbreak in China but that will hopefully not turn out to be a long term drag.

The JP Morgan Chase Investment Trust saw a similar, slightly higher even, return over the same period and has gained around 60% over the past 12 months.

Equities from fast growing Asian markets such as China, Hong Kong, Taiwan, Seoul and Singapore are also no longer just about capital growth. These markets have matured over the years and the right assets can also yield income. Last year, for example, the Henderson Far East Income fund returned a dividend yield of 6.1% for a total return of 14%. Its holdings include electronics giant Samsung and Taiwan Semiconductor Manufacturing – one of the biggest chip makers in the world.

Other funds with significant exposure to China and east Asia more generally that have recently done well include the Schroder Oriental Income fund and Jupiter Emerging & Frontier Income, which has around a third of its capital in Chinese and Taiwanese assets. The latter delivered 2019 returns of 21%, including a 4.2% contribution from income and it still trades at a 4% discount to its net assets.

Despite the strong recent performance of the east Asian economies, equities from the region are not generally popular with British investors. A large part of that is due to aversion to the higher levels of volatility typical of the region’s equity markets. That’s not expected to change in coming years. Quoted in The Times, JP Morgan Chinese’s fund manager Howard Wang comments:

“Risks and volatilities are going to stay [and] geopolitics and trade tensions between China and the US will continue to bring ups and downs”.

“But we continue to find companies offering long-term growth opportunities in consumption, healthcare and technology. China is now the world’s biggest retail market. Healthcare is a broad term in the Chinese context, including innovative pharmaceuticals as well as distribution companies. Technology is more than just smartphones and ecommerce — it includes software and renewable energy”.

“The most important thing for investors in China is to focus on long-term growth opportunities.”

Darius McDermott, managing director of Chelsea Financial Services, is a fan of the Invesco China Equity and First State Greater China Growth, as well as Fidelity China Special Situations. His faith is based on the growing contribution of local consumption to China’s economic growth:

The message is clear. China and east Asia offers potentially very attractive long term growth opportunities. But investors should be prepared to accept a bumpy ride and a higher level of risk than is typical for developed western equities markets.

But the growth potential is certainly there. Three decades have now past since China’s Communist Party leader Deng Xiaoping changed the direction of the vast country’s economy by moving away from Maoist Marxism and towards ‘socialism with Chinese characteristics’. The latter resulted in the most spectacular growth story in modern economic history, becoming the engine of global growth for at least the past two decades. Over 30 years on and that growth is now slowing.

However, while strong double digit growth appears to be a thing of the past for China, last year’s GDP growth figure was, at 6.1%, still almost three times U.S. GDP growth and several multiples of the UK’s 1.1%. Hopes for strong, if no longer spectacular, growth lies with China’s growing middle class and its increasing levels of consumption. Consumption, rather than exports, is now China’s biggest driver of economic growth and must continue to keep the economy moving in the right direction.

Chinese equities, as is generally the case in emerging markets, struggle to meet the criteria that ethical investors demand. More pragmatic investors will hope that international integration will lead to improvements and reform in corporate governance, management practises, business standards and working conditions and rights.

How To Invest In China’s Economy And Equities Market?

The best way for private individuals investing online to gain exposure to Chinese and east Asian equities is through funds. It is now possible to buy shares in Chinese stock market-listed companies through several of the major UK online investment platforms. But stock picking Chinese companies is probably best left to the experts. And the higher levels of volatility and risk also means the kind of diversification a fund offers is ideal.

Contemporary investment platforms have made it far cheaper and easier to invest in far flung equity markets. There is now a reasonably good choice of funds offering exposure to the market. Several of which, and most of the biggest funds, have been mentioned here.

For investors who are prepared for volatility, do not insist on only investing in securities that tick all the ESG boxes and can tolerate a level of risk, China and east Asia looks a strong prospect over the next several years. And it’s easier and cheaper than ever to gain exposure through most major investment platforms.

Natural gas prices have rocketed with Russia accused of managing supply to drive up... END_OF_DOCUMENT_TOKEN_TO_BE_REPLACED

After their valuations boomed in 2020, the UK’s online fast-fashion giants of Asos and... END_OF_DOCUMENT_TOKEN_TO_BE_REPLACED

The dust has almost settled on the months-long takeover battle between U.S.-based private equity... END_OF_DOCUMENT_TOKEN_TO_BE_REPLACED