The Boohoo share price has gained over 9% so far this week on the announcement that the American hedge fund Citadel has built up a stake of a little over 5% in the company. The stake, reportedly acquired mainly through derivatives, has presumably been built up based on the assessment Boohoo has been oversold.

The company’s share price has tumbled by almost 82% over the past 12 months after sales and margins disappointed investors after the pandemic boost for online retailers wained. Boohoo was also embroiled in a scandal around working conditions at a number of Leicester factories subcontracted to produce garments for the company. 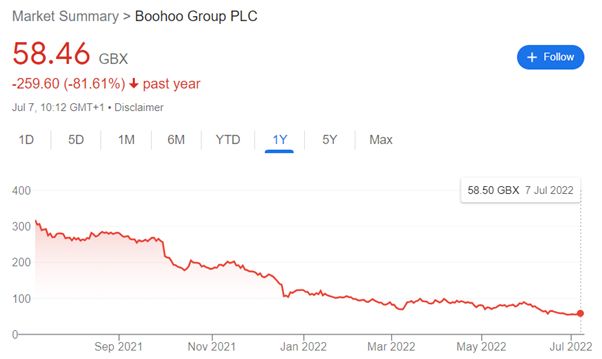 Boohoo didn’t have direct contracts with the facilities, which an investigation found were employing workers illegally at salaries below the UK minimum wage in conditions that failed to meet health and safety standards. However, the company admitted that it bore a level of responsibility and should have had tighter control of its supply chains.

Boohoo has also been punished by markets over the past year over concerns around margins pressured by surging shipping costs, an increase in customer returns and the impact faltering consumer confidence will have as the economy slows and shoppers grapple with the cost of living crisis. The fast fashion company, whose share price peaked at 413p in June 2020 currently trades at just 58.5p-a-share.

However, like many other ‘pandemic stocks’ that saw their valuations soar and then subsequently plunge, there has been a feeling in some quarters that Boohoo has recently been oversold. While the valuations it achieved in 2020 were clearly an overreaction to a purple patch during the early months of the pandemic, there is a reasonable argument Boohoo’s subsequent decline in valuation has also been an overreaction. It’s an argument Citadel, founded by the American billionaire Ken Griffin, clearly believe holds merit.

Is Citadel right and Boohoo has been oversold?

Citadel, founded by Griffin in 1990, is one of the world’s biggest hedge funds with around $51 billion in assets under management. While the FCA reports Citadel also has a short position against Boohoo that amounts to 0.5% of its issued share capital, that is likely to be a hedging position. Or a decision taken by one of the hundreds of autonomous trading teams within Citadel, which as a policy doesn’t take house views of individual stocks.

But the fact such a huge and historically successful hedge fund has built up a relatively significant long position amounting to 5% of Boohoo’s issued equity indicates confidence the stock is currently undervalued.

Citadel is also not the only major U.S. hedge fund to recently snap up exposure to Boohoo. Late last month Camelot Capital Partners announced it had taken a 4.59% stake in the British online retailer, crossing the threshold for regulatory disclosure. The California-based investment vehicle bought approximately 58 million shares for a stake representing 4.59% of voting rights.

With such big beasts of the investment world recently buying into Boohoo, should you be taking note and considering the stock yourself at its current level?

The first question to ask is why Boohoo’s share price has fallen so precipitously over the past 12 months in the first place. Has the stock genuinely been oversold or is its current valuation simply a fair reflection of underperformance, poor management and risks it still faces?

Boohoo’s problems appear to be a combination of factors the company’s management is responsible for, such as the supply chain scandal, and others that are a product of the wider economic environment its competitors are also suffering from. These include higher shipping costs, supply chain snarl-ups, and higher salary costs and other overheads increasing as a result of elevated inflation.

The company’s management was confident of a return to growth in Q2 of this year but investors will have to wait until mid-September when its interim trading results are due to be presented to learn if that is the case. Boohoo has said it believes tighter supply chain and cost controls, particularly around stock levels, will bring its operating costs down in Q2 and beyond.

Major capital expenditure programmes such as building its first distribution centre in the USA have also had an impact on recent profitability and free cash flow. However, longer term that investment should have a major positive impact on its operations and operating margins. Orders having to be shipped from outside of the country due to the lack of a local distribution network has hurt the profitability of its North American business as well as making it less competitive on delivery times.

Once the new facility in Elizabethtown, Pennsylvania has been completed and start operations, scheduled for mid-2023, Boohoo believes it will be far more competitive in the USA and win market share from competitors. Another major supply chain investment is the automation of its Sheffield distribution centre in the UK with plans to introduce automation into all four of its UK distribution centres.

The biggest threat Boohoo faces appears to be from even cheaper competitors, especially China’s Shein. It has the advantage of being able to produce its garments at an extremely low cost in China, unencumbered by the same level of regulatory oversight that Boohoo has to deal with as a London-listed company.

However, while Boohoo, as cheap as most of its products are, are unlikely to be able to compete directly with Shein on price (the same can be said of any fast fashion company with business and manufacturing operations in the West) it can still be competitive. Being able to convince consumers they are not buying garments manufactured in sweatshop conditions is likely to be a competitive edge as it moves past the Leicester factories scandal. An optimised supply chain will also confer new advantages.

Boohoo’s trading outlook is also cautiously optimistic with full-year guidance maintained after UK sales returned to growth in May. Another strength is the company’s portfolio of brands which now includes several established traditional names from the UK high street including Debenhams, Karen Millen and Coast.

An investment in Boohoo would not be without risk and the next several months could be tricky for retailers generally with the economic downturn expected to bite even deeper. Even for a fast fashion retailer like Boohoo that sells products towards the lower end of the fashion pricing scale.

But longer term, with major investment in its supply chain and logistics capabilities and e-commerce still expected to be a growth market on a macro level, at its current valuation, Boohoo could offer attractive long term upside. It’s certainly not a short term investment and patience might be required. But Citadel and Camelot Partners have both decided the company currently offers good enough value to take major stakes in its future return to health.

Their track records at getting investments right aren’t perfect. No hedge fund’s is. But they are good enough that investors should take note of their confidence in Boohoo at recent share price levels.