Should investors worry about the energy giants’ aggressive move into green energy?

That Instagram image was accompanied with the statement to the oil and gas giant’s followers:

“While we might be new to offshore wind, we’re not new to offshore. We have spent more than 50 years working on complex, demanding projects out to sea. It’s what we do.”

The choice of Instagram is perhaps symbolic of the demographic BP was trying to convince of its credentials as a future green energy giant. The oil and gas major, along with its peers in the traditional energy industry, is under a lot of pressure to transition towards renewable energy. If it doesn’t, the major institutional investors the company’s market value and ability to raise capital relies on, will start to disown it.

The new generation of investors won’t accept the risks involved in their money being overly exposed to an industry whose time is increasingly obviously up (only the timeline of the end of the oil and gas market as a major sector is in any real doubt), even if there may still be healthy profits to be eked out for another couple of decades. And they are also wary of the increasingly negative PR that comes from being attached to being invested in a ‘dirty’ industry.

Which is why Mr Looney has spent the first year of his leadership of BP telling investors about exciting progress being made towards the commitment of the company achieving net zero carbon emissions status by 2050. Making that commitment was one of the new chief executive’s first acts a year ago.

A year later, the pursuit of a sustainable new business model compatible with a changing world, accelerated by a slump in the oil and gas market hitting revenues and asset valuations badly, culminated in that Instagram post. It announced that two bids tabled in partnership with German energy giants EnBW Energie Baden-Württemberg had been successful. BP’s green energy revolution had just gotten serious.

Why did BP pay so much to win the Irish Sea offshore windfarm sites auction?

But while investors themselves encourage, even forced, BP’s hand when it comes to the extent of its commitment to transitioning to the new format of renewable energies company, should they also be worried at what it might cost?

BP and BnBW Energie acquired total potential power generation capacity of three gigawatts – enough to power 2.8 million homes. But their determination to win the blind auction at seemingly any cost means the partnership has paid through the nose. The winning bid promised to pay the UK’s Crown Estate £462 million a year just to hold the options to develop the seabed zones.

That adds up to a huge £1.8 billion investment over the four years BP estimates a final investment decision will take. Before the huge cost of building the windfarms themselves.

The option fees committed to were a colossal 73% higher than those offered by RWE, another German energy company and the next highest winning bidder. A bid of just 30% the sums actually offered would have been enough to secure the options on the sites. That means either those in charge of the bid at BP and EnBW Energie cost their companies a lot of money by overestimating the competition. Or the strategy was simply to remove any doubt and win the auction at almost any cost.

Another context in which to place the sheer enormity of the BP partnership’s winning bid is that it was worth around 20 times, or a 2000% increase, on the prices paid to win seabed rights the last time such an auction was held in 2009. The fee will be converted into 2% of turnover only once the windfarms start generating power.

While turbine technology is continually advancing, meaning the latest giant turbines more efficiently harness wind power to generate more energy, improvements are not in that ballpark. BP and EnBW Energie have undoubtedly paid a huge premium for the sites.

But have they just catalysed a level of inflation that will now store up future problems for not only themselves going forward and transitioning to a renewable energies mix, but the UK renewables sector as a whole?

There is stiff competition for premium sites for renewables generation, largely due to the fact all the major oil and gas companies are facing the same pressures as BP to move into renewables. French oil and gas giant Total was another successful bidder for one of the six Irish Sea sites auctioned off. It acquired, in partnership with Macquarie, a site with a generation capacity of 1.5 gigawatts.

Shell, the Anglo-Dutch giant that is even bigger than BP, has also committed to a target of achieving net zero carbon emissions status by 2050. It will compete with BP for most premium UK sites. There is also new political pressure with both UK prime minister Boris Johnson and new American president Joe Biden putting renewable power capacity as central pillars of their respective governments’ policy.

The size of BP’s bid last week has raised concern the competitive rush into green energy will inflate prices in a way that will hurt margins for energy companies, a cost their investors (including many of the UK’s most popular pension and insurance funds) will ultimately bear. And consumers in the form of higher energy costs.

Scottish Power chief executive Keith Anderson commented on the aggressive ambitions of the oil and gas giants with:

It could also be sour grapes. Scottish Power is owned by Spain’s Iberdrola – an unsuccessful bidder at the same auction. Other established players in the offshore wind sector, including Denmark’s Orsted, also lost out. Either their greater experience in offshore wind means they realise paying such inflated fees don’t stack up. Or they simply lack the financial muscle of the oil and gas giants, who can better afford to take on huge upfront costs.

Time will tell if, and how badly, BP and EnBW have miscalculated their bid. The acid test will come down the line when the turbines are installed and operational and another kind of auction takes place – the contract for difference (CfD) scheme. The scheme is a reverse auction held once every two years and sees power producers bid to undercut each other to offer the government the lowest price for their electricity. Winning that bid secures a guaranteed price for the electricity produced for the next 15 years.

The last time the CfD scheme ran its auction, in 2019, a new record low price of £39.65 per megawatt hour (MWh) was set. The first major UK offshore wind projects secured a price of £150 per MWh and in 2017 the winning bid was at £45. At the 2019 price, offshore wind becomes effectively subsidy-free.

But these electricity rates present BP, and any other future winners of auctions at comparable price levels, with a conundrum. How to keep making the kinds of returns investors in oil and gas majors have become accustomed to? BP insists it can still achieve returns of 8% to 10% on its investment in the wind farms.

That will be key to BP retaining its position as one of the best dividend payers in the FTSE 100, a major incentive to investors who back it. But one energy industry executive quoted by The Times newspaper is convinced at the prices paid to secure the offshore sites “it will be a miracle if they get to 2%”.

Will oil and gas majors be a very different kind of investment as green energy companies?

Martin Young, an analyst at fund manager and investment company Investec believes the increased competition in the offshore wind sector, and the arrival of deep-pocketed oil and gas companies, means returns will inevitable continue to come down and already have.

But while returns may be more modest, they are likely to provide more stability than the often-volatile oil and gas sector. Mr Young believes this will see energy producers evolve into something more like utilities:

“Over time, it’s a revolution in the oil and gas shareholder base. You’re going to end up with shareholders that want a return a bit like utilities — stability plus growth.”

But like forward-looking companies in other sectors, energy companies focused on renewables are being assigned higher market valuations compared to their oil and gas peers. For example Denmark’s Orsted, which was an early switcher from oil and gas to renewables, has a market capitalisation of £51.2 billion. That’s only fractionally less than BP’s current market value of £54.95 billion, despite the fact the latter has far higher turnover and producer much more energy. 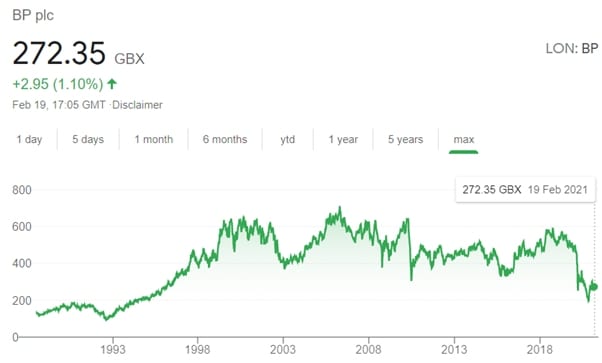 It compares to how electric car manufacturer Tesla has become, by some distance, the world’s most valuable automaker – despite selling far fewer vehicles, for much lower turnover and a fraction of the profits generated by traditional peers. Last year Florida-based wind and solar company NextEra Energy overtook Exxon Mobile’s value at one point.

BP’s board may well see that reality as justification for upping the ante on what it is prepared to pay to accelerate its own transition towards a greener energy mix. Dev Sanyal, the company’s head of gas and low carbon energy has said he believes BP’s transition is “creating a business that is going to be increasingly rewarded by the shareholder [and] by the customer”.

“This is an asset that never declines if you manage it well. You don’t have a commodity cycle where you have peaks and troughs. That is not unattractive to investors. You have a steady return profile”.

“When you think of it in those terms it’s very attractive. You have a rate of return that is stable and predictable.”

If BP’s confidence in its ability to meet its returns target proves to be well placed, investors may benefit from a combination of continuing strong returns and share price growth based on market approval of the transformation to green energy producer. If it isn’t, there could be some messy years on the horizon.

The tricky part is how long investors will have to wait to see if the move will pay off. It is likely to take years before it becomes clear if BP has just made a decisive move that guarantees its future. Or has lost sight of financial discipline in its desperation to quickly ‘go green’.