Should you be investing in biotech as a meta trend?

20 years ago, an investment in the current generation of giant technology companies such as Google, Amazon, Apple, Microsoft, Facebook et al, would have been a spectacularly successful move. In early April 2001, the Amazon share price was $8.37. Fast forward two decades and it’s $3372.2. That’s a return of around 40,189%, averaging out at over 2000% a year. Not bad would certainly qualify as the understatement of the century!

Google (now under its holding Alphabet) went public in August 2004 with an early trading price of $54.16-a-share. The Alphabet share price closed last week at 2270.67, meaning early investors have seen their shares return 4091% over 17 years, at an average of over 240% a year.

We won’t go through all the big tech stocks one by one but you get the idea. Investors with the foresight, or luck, to get in early have been well rewarded. They benefitted from a meta trend that has now been in place for over 2 decades – technology platforms and ecosystems.

From shopping to socialising, we now spend a major chunk of our lives interacting with a handful of the biggest technology companies. iPhone owners don’t just pay Apple when they buy their latest smartphone. They also pay for apps through the App Store, with Apple taking a substantial cut. Extra iCloud digital storage may well also be paid for as well as options from a quickly growing range of services like Apple Music, Apple TV+ and Apple Arcade for video games.

Amazon accounts for a huge 50% of all e-commerce in the USA and e-commerce now accounts for around 15% of all retail in developed economies such as the USA and UK. That means one company has a 7.5% share of the entire retail market in major economies. No wonder investors have done so well! 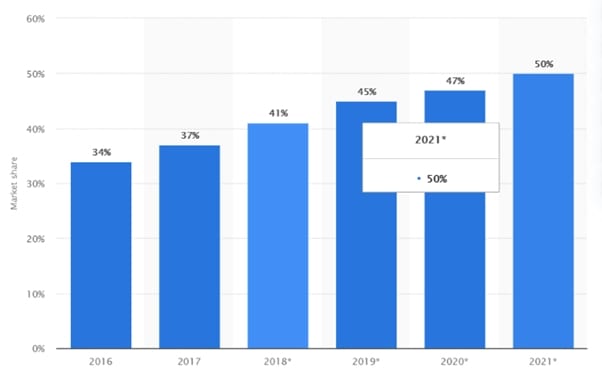 Meta trends – what does history teach us?

Most meta trends are not quite so devastatingly profitable as the big tech meta trend has been over the past two decades. These stocks may continue to prove good investments over the next decade or two. But few would bet on their growth not now slowing down considerably simply because they are already so valuable.

There’s also a chance we’ve reached peak ‘big tech’, and regulators will act on long-running threats to clip the wings of the biggest companies to protect competition. Companies like Amazon, Apple and Alphabet getting bigger still is a concerning prospect on several levels.

But for investors who missed out on all or a significant portion of the spectacular returns delivered by the big tech meta trend, history should provide some comfort. New meta trends can be expected to take over the growth stories of those that run out of steam and eventually settle into comfortable but more sedate maturity.

Pre-tech, it was oil and gas majors and supermarket chains that seized control of previously fragmented sectors and made fortunes for themselves and investors. Many are still large, profitable companies but they are now cash generators rather than serial innovators.

The wheel turns and it is very rare for companies and sectors to remain the ‘hot thing’ delivering the most impressive investment returns for more than a decade or two. There are exceptions. Microsoft has reinvented itself and is still one of the most valuable companies in the world despite being one of the oldest names in tech and founded in the mid-1970s.

But the reality is the Microsofts of the world are rare beasts. Few companies embark on a 5-year (2016-21) period of growth that sees them almost quadruple in value 40 years after being established. Microsoft did so by spotting the big tech meta trend and making sure it was onboard by updating its software business model and moving into cloud computing.

Contemporaries like Oracle didn’t. And while some are still major tech companies are no longer in the same league. Apple is a similar tale. Founded in 1976 it was struggling before pivoting to ride the big tech meta trend that made it the most valuable company in the world. Rivals like Nokia and Blackberry didn’t and are now in the doldrums with questions over their future viability.

Investors should always be keeping an eye on the next meta trends and trying to identify them at their embryonic stage. Picking out the individual companies that will benefit most from meta trends is likely to be very much hit-and-miss. It is for even the most experienced investors, with so many factors, not excluding the undeniable slice of circumstance that can make all the difference, influencing outcomes.

But identifying meta trends themselves is less hit and miss. It didn’t take a genius to identify by 2001 that the internet would be a major influence on the economy and our daily lives over the next couple of decades. And it doesn’t take a genius to identify today that renewable energy and cleantech will be a meta trend over the next two decades as the world goes electric.

But it’s another meta trend many analysts are convinced will be one of the most influential in coming years we’ll look at today – biotech.

The prototype of what became the internet was developed in the late 1960s with the technology gradually evolved in the 1970s and 1980s. But it wasn’t until the mid-1990s that an internet connection started to make its way into the average family home in developed economies. And that’s when the digital revolution really got started.

We might be at a similar tipping point when it comes to biotechnology.

Biotechnology is the use of living systems and organisms to develop or make products. Biotech has a wide range of application from agriculture to developing microbes able to break down waste plastic and other pollutants. But biotech most commonly refers to medical breakthroughs, specifically the development of new medicines or improved ways of practising medicine like targetting treatments based on the individual biology of the patient.

Biotechnology advancements rest on two key factors – our understanding of genomes, especially the human genome. And the availability of big data and the AI algorithms able to sift through it to find patterns in a way humans and less sophisticated software cannot – at least not without it taking years or decades.

It is now 20 years since the human genome was sequenced and over the past two decades, our understanding of how diseases work and how to treat them has grown exponentially. That exponential growth in our understanding is also accelerating thanks to cloud computing and increasingly sophisticated AI machine learning algorithms. Huge oceans of data have been compiled and that they can now be quickly and relatively cheaply processed by algorithms hunting for the kind of clues that lead to medical breakthroughs. The digital age and IoT (internet of things) mean those data oceans are also growing exponentially.

The result, combined with strong financial markets awash with cash providing generous funding, is a biotech sector starting to burst with innovation. The pace at which effective Covid-19 vaccines were developed in just months last year, compared to the years that would have been necessary until recently, is the perfect example of the progress being made.

Nobody expects the pace of that progress to slow. Quite the opposite. New techniques such as cell therapy and designer antibodies alongside better chemistry and new medical hardware are leading to new generations of treatments for conditions such as cancers and brain diseases like Alzheimer’s that are major killers and have proven resistant to medical science.

But the biotech sector is ramping up its arms race and there is widespread confidence genuine, game-changing breakthroughs are now on the horizon.

How to make money investing in biotech?

But even if we are convinced that the biotech space will blossom over the next decade or two, becoming an economic meta trend, as well as offering good news for all our prospects of a long and healthy life, how should we go about investing in it?

The UK is a particular hotbed for innovative biotech companies. Oxford Nanopore and Vaccitech, the company behind the Oxford-AstraZenica Covid-19 vaccine, are both part of the Oxford biotech cluster. Many of the most influential and innovative biotech breakthroughs are coming from small companies spun out of university laboratories. Some are also now starting to come through the pipelines of venture capital incubators.

Wealthier investors willing to take on significant risk in the hope of striking gold might consider venture capital investment into promising early-stage biotech companies. That can be done either directly via the tax-efficient EIS scheme or through Venture Capital Trusts with a biotech focus.

In the latter case a professional fund manager invests across multiple prospects, spreading risk for investors and also offering access to sector expertise when it comes to picking the companies invested in. VC trust investments also offer the same attractive tax breaks as EIS investments.

For most investors, investing directly in biotech start-ups is likely to prove both too rich (minimum investments are usually at least a significant five-figure sum if not more), and too risky. Like all start-up investments, they should be made on the understanding most will fail. The approach is to invest in several with the hope one or two come off. Such investments are also made on the private market and are therefore illiquid with capital tied up for several years.

Investing via a VC trust spreads risk across a number of companies and offers some more liquidity. But VC trusts still fall into a higher risk category and aren’t for the average investor that can’t afford to take the chance of a chunk of their portfolio losing value if things don’t work out.

Investing in already listed biotech companies is another option. It’s still a risk but publicly traded biotechs are generally, though not always, at a later stage of their development than those that are still private. And shares can be sold at any time, de-risking the investment to an extent.

There are now quite a number of promising, developing biotechs listed on Wall Street exchanges, particularly the Nasdaq. And the London Stock Exchange is making a concerted effort to attract more to the City. There are a growing number of options for stock pickers to sift through and potentially back.

But again, picking out individual biotech stocks is not for everyone. It requires knowledge of the sector and stock picking generally. It means investing plenty of time in research and then monitoring investments over the long term. And with most biotechs still relatively small developing companies relying on commercialising a steady stream of breakthroughs that aren’t guaranteed, still involves plenty of risk.

Biotech funds, either actively managed or tracking an index, are probably the best option for most retail investors. Actively managed biotech funds can be pricey when it comes to fees. But given the sector’s growth potential and need for specialist knowledge, it might be worth paying them in the right circumstances.

Actively managed funds might also offer exposure to a combination of publicly traded biotech companies and those that are still private.

A cheaper option is tracker funds that follow a biotech index. There is now quite a healthy choice of ETFs on the market which track the sector.

The best approach to gaining exposure to the biotech meta trend will depend on your financial circumstances and investment goals. And you should consult with a qualified advisor if you are unsure about the risk involved in different kinds of investment.

But biotech does look like a prospective sector to have the right kind of exposure to and innovation and commercialisation seems set to drive growth for decades to come.