Should you Be Investing in Gold in 2018?

For those who are doing some ‘New Year’ investment portfolio rebalancing for the year ahead, on asset class being tipped for a strong 2018 is gold. With interest rates rising, buying gold may seem counterintuitive as part of an ‘out with the old and in with the new’ reassessment of investment weightings.

A commonly accepted investment maxim is that increasing interest rates make holding other safe haven investments such as cash and bonds more attractive, which in turn weighs upon the price of gold. Gold is, so the logic goes, at a competitive disadvantage to these two alternatives due to the fact that it yields no income. Interest rates were hiked 0.25% to 0.5% in the UK at the beginning of November, the first rise in over a decade, with record lows a reality since the international financial crisis. In the USA, the Federal Reserve raised rates 3 times over the course of 2017, to 1.5%. The base interest rate was hiked about 0% in 2015 for the first time since being reduced to the historic low as a measure to spur growth after the crisis.

A further 3-4 incremental rises are expected this year to combat inflation that has been rising and expected to be accelerated further by swinging corporate tax cuts recently signed into law. Gold price tends to rise when inflation increases as it is seen as a value-protection hedge against inflation. The other factor in gold’s favour this year is that it actually turns out gold prices do not fall when interest rates rise. In fact, the inverse is more often the case.

Russ Mould of online stockbrokers AJ Bell goes as far as to refer to the thinking gold prices drop with interest rate rises as “a total fallacy”. In fact, historically, the opposite has been the case. Mould points to the fact that the USA has had seven cycles of higher interest rates in modern financial history, during which gold has gained an average 86%. It’s already now up 23% since the Fed’s first hike from the floor of 0% in 2015, having risen with each incremental increase since. This is because markets tend to sell gold off before interest rate hike cycles are predicted to begin and the price then recovers from artificial lows resulting from over-selling. 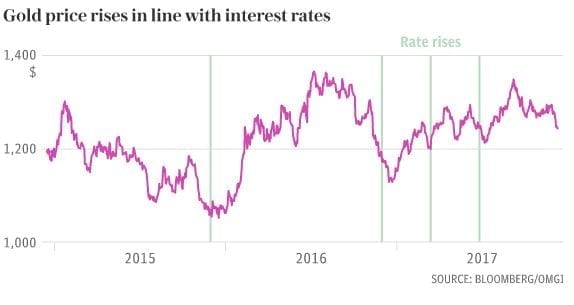 And there still appears plenty of room for further growth with prices currently sitting at around $1321 oz., significantly off 2011’s ‘near term peak’ of $1837.

However, before rushing and investing online in assets with direct or related exposure to gold prices, its 2018 prospects are subject to one major risk. Gold fund manager Mr Naylor-Leyland is quoted in The Telegraph as saying that he estimates financial markets are currently pricing three 2018 rate hikes from the Fed into current prices. Forward guidance has been for three to four but analysts now believe 2-3 is the most likely scenario. If it’s 2 this would almost certainly boost gold and 4 would likely lead to a bear market for the precious metal.

For those investing online in a SIPP or ISA, there are several potential routes to buying gold or assets with exposure to gold’s price. The first is actually buying physical gold bullion, which can be physically delivered or, probably more conveniently, held on behalf of the investor in a vault as allocated on non-allocated gold.

For those with an account with an online stock broker looking for a convenient option that can sit with the rest of an investment portfolio, a gold ETF is a good, cheap option. A pure commodities ETF holds only gold and will track its price. Other options are ETFs that hold a portfolio of precious metals, with gold likely the highest weighting. There are also ETFs and funds that track gold miner indices or mix holdings of miners and the actual metal.

Burst Bubble or a ‘Dip’ to Buy on as Bitcoin and Cryptocurrencies Slump?

As New Auction Records Set Are Wine and...

The Turbine Technology Turning Wind Into a Mainstream...