Should you be investing in these two engineering and aerospace stocks with travel and tourism back and defence spending rocketing?

When the Covid-19 pandemic struck in early 2020, stock markets dived. They did, however, quickly recover and went on a tear between late March 2020 and the end of 2021 before this year’s new struggles. The quick recovery after the pandemic sell-off was driven by the tech sector which benefitted as the digital economy boomed while physical, in-person interaction was limited.

But despite the generally positive stock market momentum that held until late last year, a number of sectors were badly hit by the pandemic and did not bounce back after the initial panicky sell-off. Travel and tourism was one such sector with flight schedules initially devasted and then badly interrupted by social distancing, quarantine and vaccination rules.

A huge drop-off in commercial flight numbers had a knock-on effect on the aerospace industry, which is heavily reliant on the income generated by selling and maintaining jet engines for civil aviation. London-listed Rolls-Royce barely survived and was forced to take on a mammoth £5 billion debt pile to get through the pandemic.

Melrose Industries was another London-listed aerospace and engineering stock to see its valuation plunge in early 2020. Its key GKN Aerospace business makes products that enable aircraft to fly safely and more efficiently. The firm’s technology is used in a range of vehicles including high-use, single-aisle aircraft and the longest-haul passenger planes as well as private jets, helicopters and the most advanced fighter planes and space launchers. 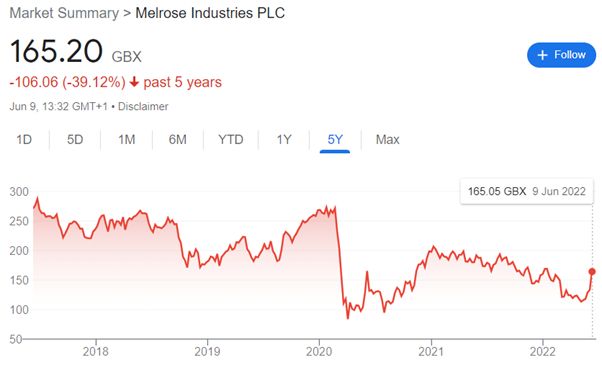 Between the end of February and early April, Melrose’s valuation plunged by almost 70%. Rolls lost around 63% but continued to see its valuation steadily decline into the autumn of 2020 by which point its share price was down by 83.5%. And Rolls’s valuation had been in decline before the pandemic struck, down a total of 90% from its most recent high in August 2018 and low of October 2020. It’s still down over 75% from 2018 peak. 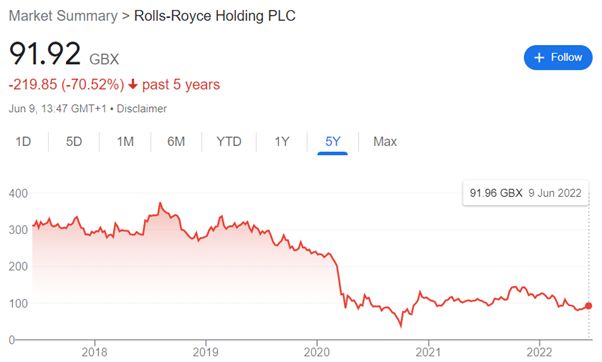 Both Rolls-Royce and Melrose have enjoyed climbing valuations over the past month with civil aviation back on track following the pandemic. Both companies also sell technology and services to the defence sector. Defence stocks are currently booming as countries across the world, and especially European nations, hike defence budgets in the wake of Russia’s invasion of Ukraine.

The Rolls share price has gained 17% in the past month and Melrose Industry’s a whopping 53%. Despite those gains, both are still down for the year. Melrose is 1.7% off its valuation at the beginning of 2022 and Rolls 28%. And the valuations of both are a long way from their levels of just before the pandemic sell-off; 61% in the case of Rolls-Royce and 40% for Melrose.

With civil aviation returning to pre-pandemic levels and defence spending through the roof, should investors expect Rolls-Royce and Melrose to recover their pre-pandemic valuations over the months and years ahead? Or are there factors that will drag on their share prices or new threats on the horizon that could prevent a full bounce back?

After a disastrous 2020 that resulted in a £4 billion loss, Rolls-Royce returned to profit last year, even if it was by the skin of its teeth to register a net income of £10 million. More significantly gross margins rose by 23% indicating the company is getting back on its feet. Cash burn was down to £1.4 billion from over £4 billion a year earlier.

Going forward, the company is faced with the challenge of paying down the huge debts it took on to get through the pandemic in reasonable shape. The divestment of non-core businesses such as the £1.5 billion sale of ITP Aero is starting to tackle the debt pile but plenty of work remains to be done.

Strong inroads have been made with a cost-cutting strategy that has brought expenses down by £1.3 billion a year early. That’s been achieved through a 34% cut in employee numbers and 70% reduction in capital expenditure.

Interest rates rising are a worry in the context of Rolls’s post-pandemic levels of debt and were likely a major factor in markets taking a wary view of the engineering giant earlier this year. A x60 p/e ratio based on profits of just £10 million last year also makes the current share price look expensive even after the huge declines of the past couple of years. And the forward looking p/e of x21 based on forward guidance for profits of £240 million in 2022 still looks rather pricey.

However, despite the cloud of debt levels that are still too high, many analysts are convinced of Rolls’ prospects over the next few years in the context of its current share price. As well as its core aerospace business, which should return to strength as the civil aviation sector does and defence spending increases, Rolls has some potentially lucrative new future revenue streams.

It is working on complete power and propulsions systems for electric motors, control systems and batteries which hold plenty of potential in the new age of electrification. And the company is also a leader in the development and production of small modular reactors (SMRs) which are seen as the future evolution of nuclear power. Its designs are expected to receive approval for manufacture in the UK by mid-2024.

As mentioned, despite its share price gaining 53% in the past month, the valuation of Melrose Industries is still down almost 10% for the year to date and analysts see plenty of remaining potential for further upside.

Citi analyst Martin Wilkie recently reiterated at 200p target for the Melrose share price after the company upwardly revised its medium term margin target from 12% to 14%. He sees improved margins and cash flow, especially for the company’s aerospace business, as likely to lead to double digit earnings upgrades applied to 2023 and beyond.

RBC Capital Markets analysts expect Melrose’s earnings before interest, tax and amortisation to see upside of at least 30% by 2025. They rate the stock as an ‘outperform’ and have a target of 220p. The Melrose share price is currently 164p.

Recent gains have been supported by the announcement of a new £500 million share buyback that commences on June 9th. The buyback is being funded by the sale of Melrose’s Ergotron business to US-based private equity outfit The Sterling Group for £520million.

Melrose’s history is as a highly acquisitive company with a strategy of buying good-quality manufacturing businesses with strong fundamentals but are underperforming. It brings them back to health by investing in research and development to improve their value proposition and add new revenue streams before selling them on again and reinvesting. It’s both a geographically and sector diverse group but its main businesses are in the aerospace, automotive and powder metallurgy sectors.

The company’s aerospace and powder metallurgy divisions currently look like those with the brightest medium-term prospects with the former currently in focus. GKN Aerospace is being overhauled and management is confident the transformation will position it strongly for the future.

2022 turnover is expected to come in at £7.7 billion, rising to £8.2 billion in 2023. The biggest risk to share price targets of 200p-220p being achieved appear to be external rather than issues within the company, which appears to be in a healthy place.