The share price of Sirius Minerals, the company behind a $5 billion potash mine project in the North Yorkshire Moors, tanked almost 64% this morning on news it is pulling a planned bond issue. The share price plunge came on the back of an announcement this morning that the planned sale of $500 million worth of ‘junk bonds’ was being withdrawn as a result of “ongoing poor bond market conditions”.

The bond issue failure, which would have unlocked a $2.5 billion credit facility from JPMorgan Stanley, comes on top of the UK government in August declining to guarantee up to $1 billion in bonds. A similar bid by Sirius for government support for the issue up to $1.5 billion in guaranteed bonds was refused in April. 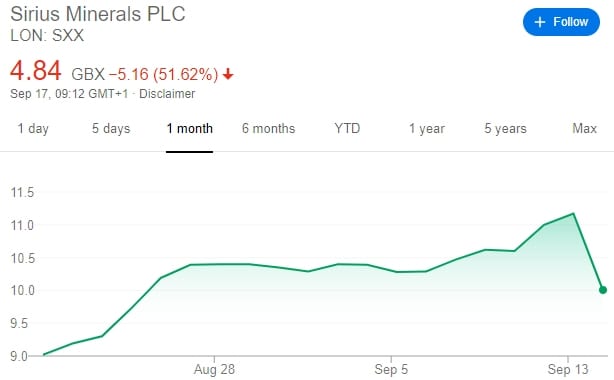 In 2016 Sirius Minerals successfully raised $1.2 billion in investment but has always needed another $3.8 billion to develop the mine to the point of production. Sirius’s Woodsmith mine is the largest mining project to be developed in the UK in decades and would be expected to be the world’s largest producer of the potash fertiliser polyhalite. Once operational it is forecast to employ around 1000 people.

The project is so expensive to develop because it requires the digging of two mineshafts 1.5 kilometres each in depth as well as a 23-mile underground conveyor belt to take the mined polyphite for processing and export on the coast at Teesside.

The scale and potential of the project as both a local employer in an economically depressed region and business opportunity engendered enough enthusiasm to overcome concerns the mine is being developed under a national park. More than 85,000 retail investors, many of them living in the North Yorkshire region and surrounding areas, have invested in Sirius Minerals shares. They will be desperately hoping that the company manages to come up with a viable new strategy to raise the finance needed to take the mine to the point of positive cash flow.

Sirius CEO Chris Fraser this morning announced that work on Woodford would be slowed down, giving the company 6 months of cash flow during which it will work on a strategic review, the centre of which will be finding new sources of financing.

Mr Fraser insisted that he is confident a solution to the mine’s current cash flow difficulties will be found and that over the coming months Sirius will work:

“With the time, we are confident we will be able to bring together a financing that works.”

A major reason why potential bond investors showed reticence is the fact that while it is believed there will be significant demand for the polyhalite fertiliser Woodsmith will produce in huge quantities, the mineral is not commercially proven. That introduces an element of risk that currently nervous financial markets are clearly struggling with.