The share prices of both Easyjet and Wizz Air have today dipped by 1.7% and 1.8% respectively after surprise news Wizz made an audacious bid to buy its larger rival. The losses add to the 10% plunge in Easyjet’s share price yesterday, while Wizz Air’s value slid by just 1.3%.

Although Wizz, with a market capitalisation of £4.96 billion, is currently valued higher than Easyjet at £3.17 billion, the latter carries significantly more passengers and generates more revenue. 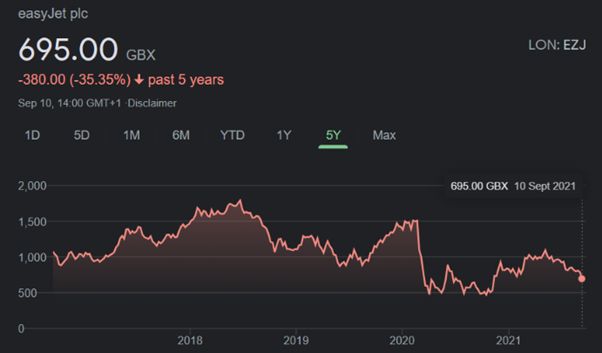 However, Wizz Air’s business and share price suffered less damage during the Covid-19 pandemic and has recovered faster. Fewer of the Budapest-based budget airline’s routes to mainly east European cities were halted over lockdown periods compared to Easyjet’s and it operates from a lower cost base meaning losses were not as severe.

While there has been no official confirmation Wizz Air was the company Easyjet declined to name when announcing it had thrown out an all-share offer for it, it is being widely reported that it was the Hungarian airline headquartered in Switzerland who submitted an offer. 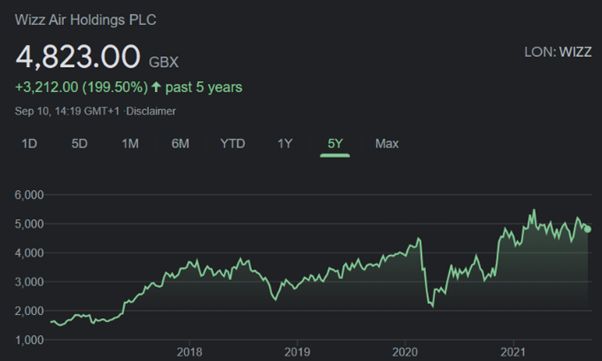 Easyjet said that after the bid, said to have been highly conditional, had been thrown out as massively undervaluing the company, the bidder confirmed they would not be making any further approach. The London-listed airline also announced plans to raise another £1.2 billion from investors due to disruption caused by the pandemic now expected to drag on for longer than anticipated.

Easyjet, founded in 1995, had never suffered an annual loss before the pandemic, which forced it to cut around 4500 jobs. Between April and June Easyjet’s passenger numbers were under 3 million, representing a drop of over 80% on pre-pandemic levels. That saw the quarter fall to a £318.3 million loss, taking overall losses for the financial year to over £1 billion.

“The capital-raise not only strengthens our balance sheet, enabling us to accelerate our post-Covid-19 recovery plan, but also will position us for growth so that we can take advantage of the strategic investment opportunities expected to arise as the European aviation industry emerges from the pandemic.”

Lundgren believes disruption caused to the industry by the pandemic has, despite its heavy financial toll on the budget airline, now created a “once in a lifetime opportunity” for it to expand its routes and schedule. He said the company has identified prime acquirable landing slots at airports that would not only help it defend its market share from new budget rivals legacy national carriers like BA plan to launch but put it in a stronger position to grow once conditions return to pre-pandemic norms.

The private equity sector and cash-rich firms that comprise it split opinion. Some view... END_OF_DOCUMENT_TOKEN_TO_BE_REPLACED

At the end of August, The Times newspaper reported on two real estate funds,... END_OF_DOCUMENT_TOKEN_TO_BE_REPLACED

The Covid-19 pandemic has famously seen many sectors of the economy fall into two... END_OF_DOCUMENT_TOKEN_TO_BE_REPLACED

Britain, like most of the world, has traditionally been a country of milk and... END_OF_DOCUMENT_TOKEN_TO_BE_REPLACED