The share price of Snap, the company behind the social media platform Snapchat, has opened to 40% losses today after the company issued a profit warning. The warning laid the blame for an expected drop in revenues and profits on weak market conditions, rather than poor internal performance, prompting plunges in the valuations of a host of other companies that rely on digital advertising revenues.

Meta Platforms, the holding company behind Facebook, Instagram and messaging app WhatsApp has opened the trading session on Wall Street to losses of over 9% while Google-owner Alphabet is down almost 6.5%. Pinterest also plunged, though not quite as drastically as Snap, with a share price drop of around 25%. 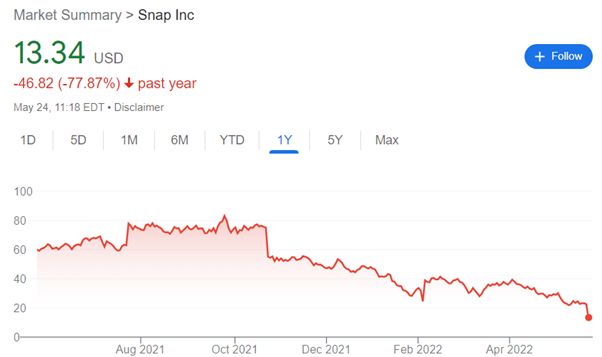 Snap’s precipitous drop in market cap cam after the company announced its revenue and earnings over the current quarter would miss “the low end” of the range it issued as forward guidance just a month ago. The company said that was because “the macroeconomic environment has deteriorated further and faster than anticipated”.

Snap’s co-founder and chief executive Evan Spiegel told investors that one consequence of revenues rising more slowly than previously anticipated would be the company slowing its pace of hiring. The platform, which is ten years old and listed in 2017, has around 332 million daily active users from a mainly teenage demographic who appreciate its photo and video messaging, VR selfie masks and short-form content. Most of Snap’s revenues come from digital advertising.

Spiegel listed factors including rising inflation, higher interest rates, labour shortages, supply chain disruption, repercussions of the war in Ukraine and platform policy changes, specifically those of Apple that recently made it harder to follow iPhone users across apps, as impacting performance. He pointed out many other companies are struggling with the same issues.

Just last month Snap was forecasting revenue growth of between 20% and 25% over the current quarter to the end of June. That would have been expected to deliver adjusted earnings of between $0 and $50 million. However, it did not offer updated ranges within which it expects sales growth or earnings to now fall, sparking the huge sell-off of the company’s stock.

A Snap regulatory filing tried to put a positive spin on the blow, telling the market: