SoftBank, the Japanese company that runs the Vision Fund, widely regarded as the world’s largest technology investor, plans to offload up to £35 billion in assets over the next year.

The company, whose founder and CEO is the 62-year-old tech entrepreneur Matayoshi Son, has seen a worrying plunge in its share price, which predates the worst of the coronavirus sell-off. It is hoped that selling off assets, many of which analysts believe were acquired at inflated valuations, will help shore up the balance sheet and go some way to alleviating investor concerns. 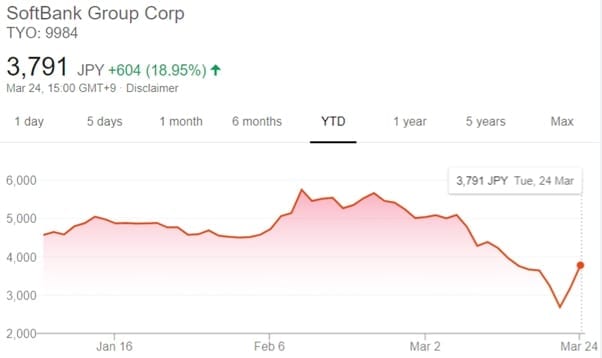 Investors have indeed apparently reacted positively to the news, with SoftBank’s share price up almost 19% during this morning’s trading session in Asia.

The massive $100 billion Vision Fund has recently weighed heavily on SoftBank’s share price after significant write-downs on a number of the tech start-ups it holds significant equity stakes in.

The most notable failure has been co-working offices company WeWork, that saw its valuation plunge after an aborted move towards an IPO last year. SoftBank had agreed a new financing deal to bail WeWork out at a valuation around 80% down on that which it made its last investment.

However, with WeWork’s ongoing viability as a company now under serious threat as its coworking buildings sit empty, but huge overheads still locked in through long term lease agreements, SoftBank has threatened to walk away from the rescue package.

SoftBank, which also owns UK semiconductor designer Arm Holdings, is heavily leveraged to debt. That has made it particularly vulnerable to the deep recession now believed to be following the coronavirus-catalysed economic shutdown around the world.

The company stated that it plans to use capital raised by selling off 4.5 trillion yen (£34.7 billion) of assets to buy back 2 trillion yen of its own shares. That buyback will be in addition to the 500 billion yen buyback already announced earlier this month. The total planned buyback now exceeds the £17 billion recently demanded by activist investor Elliot Management. The notoriously aggressive hedge fund has recently built up a 4.5% stake in SoftBank.

The problem that SoftBank faces is that if it sells off assets that have seen their valuations fall steeply in recent times, it will crystalise huge paper losses. Which means that at least part of the capital could instead be raised through the sale of some of the company’s 25% holding in Alibaba – one of its earliest investments, and most successful to date.

The stake was acquired for just $20 million in 1999 and is now worth around $125 billion. SoftBank itself is currently only worth about $60 billion, despite holding the asset – a major reason why Elliott Management was attracted by a perceived undervaluation of SoftBank’s current share price. My Son commented on the planned sell-off:

“This will allow us to strengthen our balance sheet while significantly reducing debt.”

The near 19% gain in SoftBank’s share price on the announcement is the company’s single largest daily movement since 2008.

The S&P 500 fell 0.06%, erasing earlier gains after Pfizer slashed the target for... END_OF_DOCUMENT_TOKEN_TO_BE_REPLACED