The S&P 500 index, widely considered the most accurate reflection of corporate America of all Wall Street’s major indices, yesterday hit a new record high. The index has now recovered all of the losses it sustained in the wake of the panicked sell-off in March when the full extent of the coronavirus pandemic become apparent. But against the backdrop of the single biggest drop in the USA’s GDP in post-war history, why are financial markets valuing companies higher than ever before? 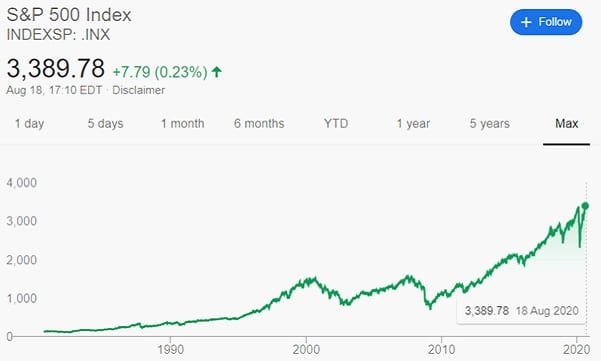 It had been hoped that major global economies, including the USA’s, would stage a ‘V-shaped’ recovery after lockdowns brought into place to control the spread of the Covid-19 virus, ended. However, with second waves of the virus meaning return to normality has been stilted, especially in the USA where Covid-19 has had a notable resurgence in many states, that now appears unlikely.

But the S&P 500 and U.S. stock markets more generally, certainly have staged a V-shaped recovery from March lows. However, the source of that recovery is causing concern in some quarters, who believe it is down to trillions of dollars of fiscal and monetary stimulus pumped into the U.S. and global economies by the Federal Reserve and other central banks.

That money has been flowing into major tech stocks such as Amazon, Microsoft and Alphabet, which currently seem to be considered by investors as a safe haven. That trend yesterday culminated in the S&P 500 closing the trading session at 3,389.78 points, slightly higher than February’s high of 3,386.15 and a new record high.

The index has been threatening to set a new high for several days now but concerns over the real health of the economy had held back investor exuberance. Markets gave a lukewarm reaction this week to results published by Home Depot and Walmart, despite them coming in better than expected. Both companies are considered strong gauges of the underlying economy, their sales reflecting the finances and sentiment of mass market consumers.

The difference in how markets are reacting to positive news for non-technology stocks begs the question of how sustainable the stock market’s recovery is, driven by increasingly giddy valuations assigned to a handful of huge technology corporations.

The technology-focused Nasdaq’s recovery was even faster than the S&P 500’s. The index fully recovered from its March lows 3 weeks ago now and has continued to climb higher. A 0.7% gain yesterday took the Nasdaq to its 34th record close this year and a 25% return on 2019’s closing level.

The Dow Jones industrial average, the third of Wall Street’s big 3 indices, did however take a different direction yesterday, down 0.2%. It is still 2.7% off its 2020 high.

Europe’s major indices were less upbeat yesterday, with the FTSE 100 closing 0.8% down and the FTSE 250 mirroring that performance with its own 0.8% dip. Germany’s DAX 30 and France’s CAC 40 were down 0.3% and 0.7% respectively. All 4 European indices have had a volatile start to trading today but are so far roughly even despite zigzagging between modest gains and losses over the first few hours of the session.

Investors will today be keen to see what clues the Federal Reserve’s minutes from its latest meeting might offer on how it expects the economic recovery to go and what further actions it may be considering. They will be published today.