CMC Markets, one of the UK’s leading spread-betting and CFDs trading platforms, has upgraded its outlook for the second time in just over a fortnight in a demonstration the extreme market volatility of the past few weeks hasn’t been bad for everyone. The company has lifted its outlook for the financial year a total of 6 times as plunging and rising markets work in its favour.

Spread-betting and CFDs trading allows traders to take leveraged positions on the share price direction of assets such as stocks, indices, commodities and currencies (forex). Crucially for CMC Markets and its peers, traders can take positions on the price of assets falling as well as rising. Taking a position on falling prices is referred to as ‘shorting’.

The practise of ‘shorting’ a tradable asset was popularised by the film ‘The Big Short’. The film follows the fortunes of traders who made a killing by predicting the sub-prime crash that catalysed the last major financial crisis a little over a decade ago.

On Friday, CMC Markets published a trading update that forecast an increase in net revenues over the 12 months to the end of March. The company’s income is now set to surpass the £219 million that analysts had expected CMC to book.

Despite the spate of upgrades over the past year, especially over the past few weeks, the share price of CMC Markets hasn’t escaped the broader impact of the equities sell-off that has torn through markets since early March. The CMC share price was down almost 7.5% on Monday, roughly halving Friday’s gains of almost 15%. Rumours that short-selling could be temporarily banned to protect public companies is presumably behind today’s fall. 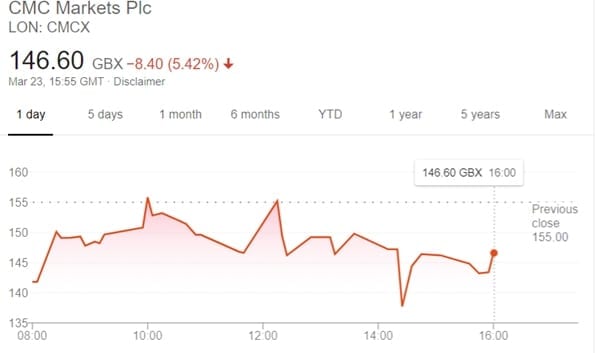 However, it looks like only an extended ban on short selling could see a reverse of CMC Markets’ recent fortunes with volatility expected to continue for some time. The company was founded in 1989 by the entrepreneur Peter Cruddas and has benefitted greatly from the digital revolution meaning spread-betting and CFDs trading became accessible to retail traders. Prior to the internet age, these higher risk financial instruments were only practically available to the trading desks of institutional investors.

Trading CFDs or spread-betting allows for the use of leverage, which multiplies profits or losses compared to the actual cash deposited upfront to open a position. As a consequence, there is a level of controversy and debate around whether it is suitable for retail traders or is too risky and should be restricted to professionals and sophisticated or high net worth investors.

But for now, plenty of retail traders seem happy to take advantage of the opportunities spread-betting and CFDs offer them. CMC commented alongside its Friday upgrade that it was experiencing “continued high levels of client trading activity over the period which has been in excess of double that seen in more normalised market conditions”.

The company also announced that 99% of the employees usually based in its offices in the City of London are currently either working from its Hertfordshire disaster recovery site or from home. CMC also runs a CFDs trading platform in Australia and Sydney office is running split shift systems across its main premises and a back-up site.