Standard Chartered Investors To Be Rewarded With $1 Billion Share Buyback

Investing online in shares of the UK-based but emerging-markets focused bank Standard Chartered has been a thankless endeavour recently. From a 2010 high of around £18.15 a share, the Standard Chartered share price is down around 63% almost a decade on. Current chief executive Bill Winters took over in 2015. Since then the share price has dropped by around a third. 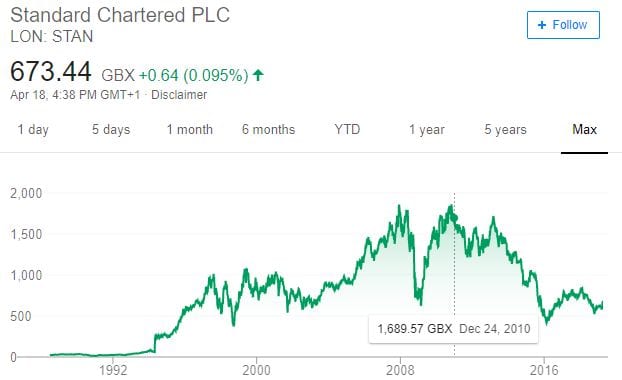 But shareholders who have been patient through the bank’s troubles, exacerbated by an £850 million fine for violating sanctions against Iran, are finally set to be rewarded. Having finally settled the fine with authorities in both the U.S. and UK, Standard Chartered is said to be applying to the Prudential Regulation Authority for permission to launch a huge $1 billion share buyback. It would be its first in almost 2 decades and the news is likely to see the bank’s share price climb when markets open again tomorrow following the Easter Monday holiday.

The application and approval process takes around 90 days, which means the buyback would be expected to begin in late July or early August. Since a 2015 call to investors for $5.1 billion to shore up its balance sheet as emerging markets struggled, Winters has overseen a huge restructuring, involving cutting around 15,000 jobs.

Standard Chartered is again back in a healthy financial position and even paying back around £1 billion to shareholders would leave it with a strong capital buffer. Rather than a one off, Standard Chartered plans to keep up the buybacks at a consistent level over the next four years. That would add up to roughly what it raised during its 2015 rights issue. Analysts have commented that just modest loans growth should allow the bank to achieve that goal relatively comfortably.

The news will please major investors such as Singaporean sovereign wealth fund Temasek, Standard Chartered’s single biggest investor with a 16% stake. The fund has been putting pressure on the bank to increase the pace of progress after it missed several revenue and shareholder returns targets over the past few years.

However, the bank still has plenty of work to do. It has recently been criticised for a change in the way it calculates pension contributions, including base pay and a “fixed-pay allowance”. Winters’ received a £474,000 this year which amounts to 20% of his basic salary plus various bonuses. However, if only calculated against base pay the percentage rises to around 40%. Investors advisory group Glass Lewis is urging investors to vote against this change to how executive pension contributions are calculated, urging a return to setting them against base pay only.