The bitcoin price and wider cryptocurrencies market may have taken a battering over the past month as valuations plunged by up to 50% but that hasn’t put FTSE 100 bank Standard Chartered off launching a new business targeting the sector. The bank yesterday announced a partnership with Hong Kong’s BC Technology Group, a digital assets and blockchain platforms investment group.

The pair are planning a cryptocurrencies and digital assets brokerage and exchange platform to service institutional investors and corporate clients from the UK and Europe. Digital assets have made considerable progress in their quest to break into mainstream financial markets over the past year but have recently suffered a string of setbacks, including being banned by China’s three main financial services regulators.

That’s seen the bitcoin price plummet from mid-April highs of over $65,000 to recent lows of under $36,000. Gains this week have seen the cryptocurrency market leader’s value return to around $38,700. 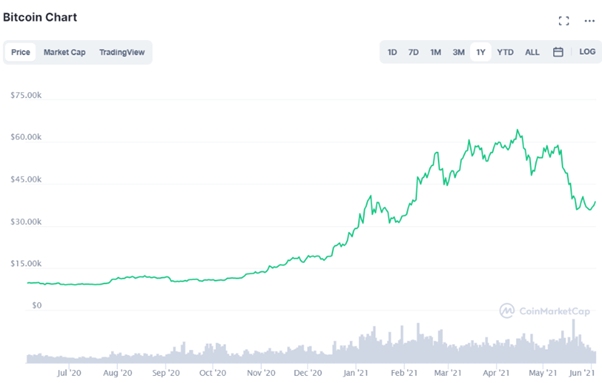 Standard Chartered is one of the UK’s biggest banking groups but does most of its business in emerging markets. It’s been one of the most adventurous British financial institutions in its embrace of the nascent market for digital assets. In December it also announced it was launching Zodia, a digital assets custody business created in partnership with U.S. banking group Northern Trust.

Both Zodia and the new brokerage and exchange business will be based in the UK. Standard Chartered expects its new digital assets business to commence operations towards the end of this year. Alex Manson, who heads up Standard’s financial technology investment unit SC Ventures commented:

“We have a strong conviction that digital assets are here to stay and will be adopted by the institutional market as a highly relevant asset class.”

Many within the traditional financial services sector still harbour doubts about the long term viability of today’s leading cryptocurrencies, citing high energy consumption, bitcoin’s early blockchain technology lacking scalability and the anonymity afforded helping facilitate criminal activity. However, there is now a general acceptance that digital assets and currencies in some form will be part of financial markets in coming years. The question is what that form will be and many are sceptical it will be that of the current market leaders like bitcoin and ether.

Last week HSBC’s new chief executive Noel Quinn said his bank was not yet ready to start offering cryptocurrency trading services due to levels of volatility and concerns over the transparency of origin and ownership.