The Superdry share price is up 5.3% in trading on Friday after the company vowed to become “the most sustainable listed brand in the world”. Founder Julian Dunkerton, who left the company in 2018, only to be reinstated as CEO in April last year, has vowed to return the company its “former glory” after a period of sliding sales.

He believes the best way to do so is to rebuild the Superdry brand as one that champions sustainable manufacturing and clothing, telling investors yesterday:

“We are being much more positive and we are brand building. As opposed to a drip-drip-drip of reducing prices all the time, we’re now proactively talking about veganism, sustainability and so on. The atmosphere within the company has shifted palpably.” 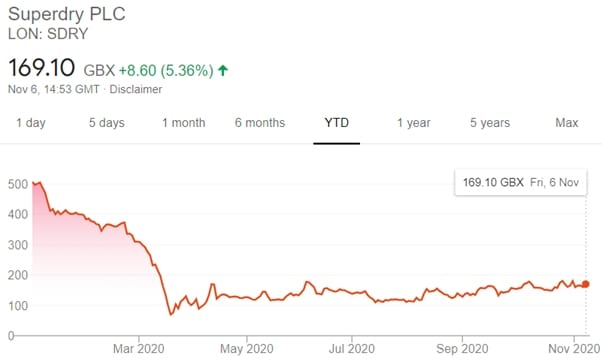 After the Superdry share price yesterday dropped by 3.3% after quarterly results showed the shutdown of stores over lockdown had hit revenues hard, they have bounced back today, and then some. The sustainability message appears to have gone down well with investors. Mr Dunkerton said that already this year, 6.6 million Superdry garments will have been organically made.

While acknowledging the poor trading performance this year, which was put down to the Covid-19 pandemic, especially store closures over the first lockdown period, Mr Dunkerton brushed the situation off as “a hiccup”, in the context of his long-term planning.

Over the first half of the financial year to October, the company’s overall revenues were down 23%, thanks to a 45% drop-off in in-store sales. That trend can be expected to now continue until at least towards the end of the year with 122 Superdry stores across England, Wales, Ireland, France and Belgium shut down again for the next four weeks. 117 stores are still operating internationally in regions where new lockdowns have not yet been imposed.

A positive that went some way to softening the blow of the plunge in sales generated by bricks-and-mortar stores was a 50% year-on-year rise in online sales. The company will target Black Friday later this month in an attempt to maximise ecommerce revenues in the run-up to Christmas.

Mr Dunkerton has heavily criticised the company’s management over the period he was absent for its reliance on discounting. However, he admitted that discounting would continue to squeeze margins over the short term while excess stock is cleared.

However, longer term, the strategy is to improve margins by making high quality garments that can claim to have been manufactured in a genuinely sustainable way. The bet is that enough consumers will be ready to pay a little more for quality that comes with a clear conscience.