The long running tug-of-war for ownership of London-listed food delivery app Just Eat appears to be edging towards a close. Dutch peer Takeaway.com, which operates across much of Europe yesterday pulled out in front of rival Naspers, the South African digital conglomerate, after both companies increased their ‘final offer’.

Naspers, through its Amsterdam-listed investment subsidiary Prosus, first upped its all-cash offer to 800p a share. The bid valued Just Eat at £5.5 billion. Shortly afterwards, Takeaway.com, whose offer is all-share, increased the slice of the combined company being offered to Just Eat shareholders.

Takeaway.com’s improved offer gives Just Eat investors 57.5% of the combined entity, up from the previous proposal for 52%. Converted into a cash value, Takeaway.com’s bid was worth 916p a share, based on the combined market capitalisation of the two companies. However, Takeaway.com’s share price lost around 10% on the Amsterdam stock exchange following news of the offer, taking the paper value of the bid down to 830p per share. Just Eat’s share price gained over 2.5%. 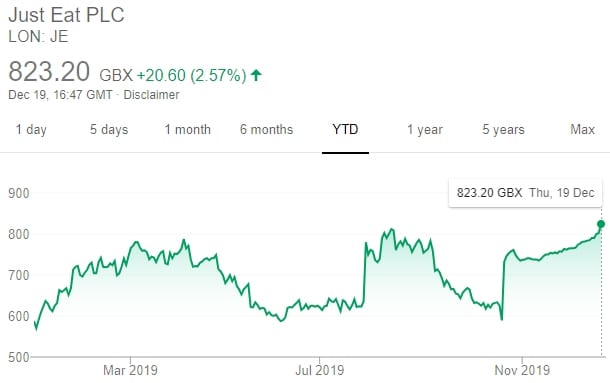 In an attempt to see its merger offer pushed through, Takeaway.com also lowered its acceptance threshold to a simple majority of Just Eat investors. It had previously wanted a 75% majority to vote in favour of its offer. The company claims it has already secured commitments from shareholders who control 41.1% of Just Eat’s equity, leaving it with just 9% more to bring on board.

Just Eat, listed on the London Stock Exchange, was founded in Copenhagen 18 years ago and can be considered the ‘original’ food ordering and delivery service to aggregate multiple takeaway and restaurant offers on one platform. The company, which expanded into the UK, which became its biggest market, in 2006, listed on the London Stock Exchange in 2014.

Originally, Just Eat was only an aggregator platform, before subsequently also starting to offer a delivery service for partner restaurants as the market evolved. That has, however, increased overheads and reduced margins. Particularly in the context of the cut-throat competition.

The battle for control of Just Eat began back in July but now finally looks like reaching its conclusion. Major investors in Just Eat, including SM Trust, its biggest shareholder with 13.4 per cent, and Cat Rock Capital, with 2.6 per cent, are among the Just Eat shareholders to have committed to accept the revised Takeaway.com proposal. Cat Rock founder and managing partner Alex Captain, said that it was “a great day for Just Eat shareholders”.

The board of Just Eat has advised shareholders to take no action for now and that it was reviewing both new offers before deciding which to recommend.

Natural gas prices have rocketed with Russia accused of managing supply to drive up... END_OF_DOCUMENT_TOKEN_TO_BE_REPLACED

After their valuations boomed in 2020, the UK’s online fast-fashion giants of Asos and... END_OF_DOCUMENT_TOKEN_TO_BE_REPLACED

The dust has almost settled on the months-long takeover battle between U.S.-based private equity... END_OF_DOCUMENT_TOKEN_TO_BE_REPLACED