The Just Eat takeover saga is finally set to reach a conclusion this week, with Takeaway.com’s £6 billion all-share offer expected to pass the 50% acceptance target within the next few days. Just Eat’s shareholders have a deadline of Friday January 10th to vote for either the all-share Takeaway.com offer, which has been recommended by the board, or a seemingly dead-in-the-water rival 800p-a-share cash bid.

While the rival cash bid from Naspers subsidiary Prosus is not yet officially off the table, it has practically admitted defeat. In December, the Dutch-registered shelved plans to support its bid by buying up Just Eat shares on the open market. Prosus had only managed to reach a Just Eat shareholder acceptance level for its bid of 1%, by the last time it reported details on its bid’s status.

Just Eat is again part of the FTSE 100, returning to the benchmark index of the UK’s 100 largest public companies last month as a result of a share price surge that has been catalysed by the takeover battle between Takeaway.com and Prosus. Last Friday the company’s share price gained another 1.7%. 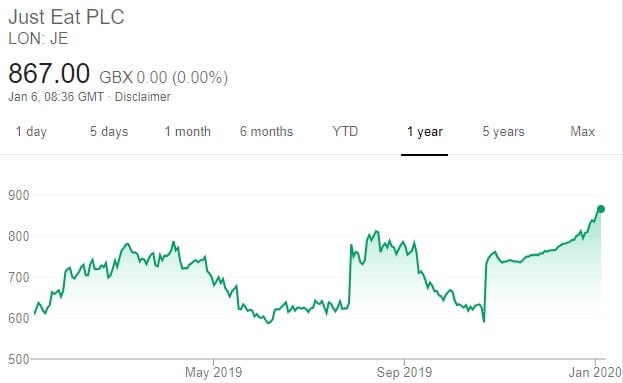 Just Eat is not actually originally a British company, despite the fact it is listed on the London Stock Exchange and the UK is its biggest market. The company was first founded in Copenhagen in 2001 and expanded into the UK in 2006. The business model has also evolved over the years.

Originally Just Eat was simply a platform that aggregated the menus of takeaway and restaurants that offered deliveries. Just Eat received a commission for any orders made through its website but partner restaurants were responsible for execution. However, as the market changed with the arrival of companies such as Deliveroo that also provided delivery services, Just Eat was also forced to adapt its own offering to include delivery.

Takeaway.com, which like rival bidder Prosus is also listed on the Amsterdam stock exchange, first announced its intention to acquire Just Eat in July last year. Prosus entered the fray in October, when it launched a hostile 710p-a-share bid. Earlier ‘friendly’ proposals of 670p and 700p-a-share had been rejected. However, even upping its cash bid to first 740p and then 800p has not been enough to win the favour of the Just Eat board and shareholders.

Natural gas prices have rocketed with Russia accused of managing supply to drive up... END_OF_DOCUMENT_TOKEN_TO_BE_REPLACED

After their valuations boomed in 2020, the UK’s online fast-fashion giants of Asos and... END_OF_DOCUMENT_TOKEN_TO_BE_REPLACED

The dust has almost settled on the months-long takeover battle between U.S.-based private equity... END_OF_DOCUMENT_TOKEN_TO_BE_REPLACED