Since a 2008 bailout at the height of the international financial crisis, the British taxpayer has held a majority stake in NatWest. That extended period came to a close yesterday after the bank, previously called Royal Bank of Scotland, announced it was buying 550 million shares back from the taxpayer. The shares will cost 220.5p each for a total spend of £1.2 billion and represent a 4.9% stake in the bank, which will take taxpayer’s ownership below 50% for the first time in almost 15 years.

The government-held stake in the banking group will drop from 50.6% to 48.1% after the transaction. NatWest intends to cancel the shares immediately after acquiring them in a boost to remaining shareholders and explaining why the taxpayer’s stake will not drop by the full 4.9%. 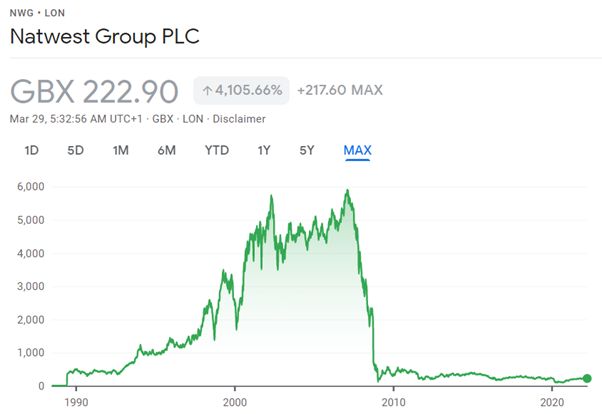 While the development is not a surprise and part of a long standing strategy to sell the stake down at a price that represents value for the taxpayer, the government described it as a landmark moment in its plan to return the bank to private ownership. NatWest chief executive Alison Rose commented on the development as“an important milestone for NatWest and a further demonstration of the progress we are making”.

However, despite patience in waiting for opportune moments to sell the taxpayer-owned shares in NatWest, they have all been sold at a steep loss with the latest tranche no exception. The taxpayer forked out 502p-a-share back in 2008 – more than double the 220.5p being recovered. At their 2007 peak, before it became clear the bank’s huge growth had been built on sand and toxic investments, Royal Bank of Scotland shares traded at up to £60.

Despite its troubles since briefly becoming the most valuable banking group in the world before crashing back Earth, NatWest is still one of the UK’s largest banking groups. It owns a number of banks including its namesake, former namesake Royal Bank of Scotland, Ulster Bank and Coutts, which is known as “the Queen’s bank”.

As RBS, the name was recently changed to NatWest in a bid to escape the negative connotations of the bailout, the group led a 2007 consortium that won a £49 billion hostile takeover battle for ABN Amro, then the largest bank in the Netherlands. The bidding war with Barclays over ABN drove the purchase price to a level many analysts considered well above fair value.

The move proved doomed and led to RBS booking a record corporate loss of £28 billion in 2008. The Treasury ultimately put up £45.5 billion for a 79% stake to save RBS from collapse. That stake is managed by UK Government Investments, a branch of the civil service that also manages other public assests like the Post Office and Ordnance Survey. However, decisions on when to sell shares are taken by the Treasury.

The original 79% stake has been gradually reduced since 2015 with NatWest also buying back £1.1 billion in shares around this time last year and the Treasury sold another £500 million worth last November. The taxpayer also had an over 43% stake in Lloyds Banking Group after the financial crash but that had been divested by 2017 at a profit of nearly £900 million.

The plan is for the remaining stake in NatWest to be sold off within the next three years but a huge overall loss will inevitably be booked despite the share price almost doubling in value over the past year and a half. An operating profit of £4 billion was made last year compared to £481 million a year earlier.

With interest rates set to rise significantly over the remainder of this year, and potentially into next, there will be hopes for more share price gains to help reduce the overall loss taken by the Treasury.