The board of Taylor Wimpey, one of the UK’s largest housebuilders, could be in for a rough ride in 2022 following reports today that Elliott Advisers, the UK affiliate of the U.S. hedge fund and renowned activist investor Elliott Investment Management, has started to build a stake in the business.

Elliott Management, founded and run by Paul Elliott Singer, has recently been pushing for board changes at the British pharmaceuticals giant GlaxoSmithKline after building a small stake in the company this year. If the rumours the investor has taken an interest in Taylor Wimpey are true, a similar story can be expected to unfold. Elliott is famous for the uncompromising stance it takes as an activist investor in attempting to push through reforms it believes would benefit shareholders. 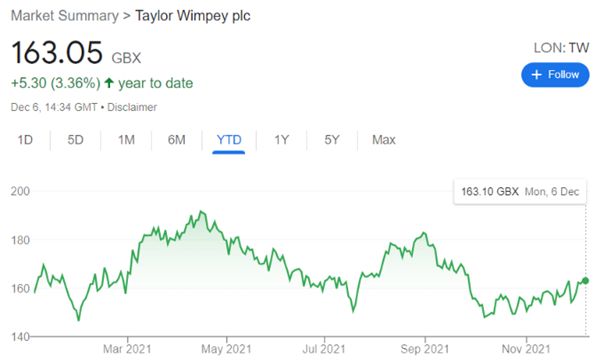 Taylor Wimpey’s corporate structure is to operate regional businesses around the UK, of which it has 23, which locally build residential properties from blocks of flats to detached houses of up to six bedrooms. The company completed around 15,500 properties in 2019 and expects to deliver about 14,000 this year after the Covid-19 pandemic limited construction last year.

The Taylor Wimpey share price has, however, only gained a little over 3% over 2021 to-date despite booming sales prices and margins this year due to limited housing stock on the market and pent-up demand following the worst of the pandemic. This year’s operating profit is expected to come in at around £820 million. While that is a significant improvement on the £300.3 million banked last year it is still down on the profit of £850.5 million recorded in 2019.

While it’s not clear how much of a stake Elliott has built up in Taylor Wimpey so far it could currently be as little as 0.1%. The company has refused to comment on whether it has indeed acquired equity in Taylor Wimpey, if it plans to build a larger stake, and what its intentions might be.

The possible move was first reported in the Betaville Blog which reports corporate dealmaking. The blog also wrote that Elliott’s intentions are to encourage “corporate activity” which could include a takeover.

“back on track to generate a strong level of free cashflow to support its ordinary dividends and potential special dividends or share buybacks.”

The note to investors also said analysts at Investec anticipate the builder’s focus will be managing its land purchase to home sales cycle, improving margins and returning “significant” capital to shareholders. However, areas Elliott could push for change in could be the company’s business in Spain, which many investors consider a non-core distraction, as well as improving margins. There has also been criticism of the company’s recent raising of capital to invest in land, the need for which has been described as “questionable”.

Elliott Management have already shown a strong interest in the UK’s housebuilding sector through a deal made earlier this year to snap up Avant Homes Group, which builds around 2000 properties a year from the Midlands up to Scotland. The hedge fund teamed up with former Persimmon boss Jeff Fairburn on that move and may also be taking his advice on any possible stake-building plans in Taylor Wimpey.